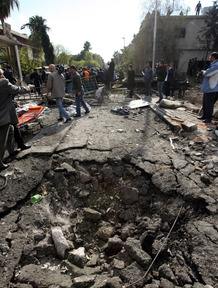 A crater left by an explosion at the site of a suicide attack today in Damascus.

NPR’s Deborah Amos says it’s the “first such attack since the beginning of a 10-month revolt” against President Bashar Assad’s regime.

Now there’s the question of who is responsible.

President Bashar Assad’s regime was quick to declare it was the work of terrorists — a claim that supports its contention that it’s not at fault for the deaths of several thousand people this year because it is battling armed gangs and terrorists, even though the U.N. has said the regime is to blame for as many as 5,000 deaths.

Those who have been protesting against Assad’s authoritarian regime are saying, according to the BBC, that “the government … staged the attacks to influence an Arab League observer team” that arrived in Syria on Thursday to monitor the situation.

NPR’s Amos, who is following the news in Syria from Beirut, says government officials “escorted the [Arab League] monitors through the smoking wreckage even before the dead were removed.”