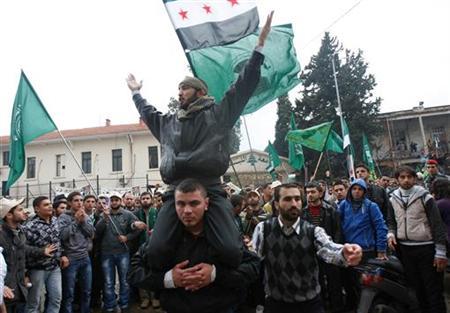 (Reuters) – Syrian forces killed 111 people ahead of the start of a mission to monitor President Bashar al-Assad’s implementation of an Arab League peace plan, activists said on Wednesday, and France branded the killings an “unprecedented massacre”.

Rami Abdulrahman of the Syrian Observatory for Human Rights said 111 civilians and activists were killed on Tuesday when Assad’s forces surrounded them in the foothills of the northern Jabal al-Zawiyah region in Idlib province and unleashed two hours of bombardment and heavy gunfire.

Another 100 army deserters were either wounded or killed, making it the “bloodiest day of the Syrian revolution”, he said.

“There was a massacre of unprecedented scale in Syria on Tuesday,” said French foreign ministry spokesman Bernard Valero. “It is urgent that the U.N. Security Council issues a firm resolution that calls for an end to the repression.”

The United States said it was deeply disturbed by reports of indiscriminate killing and warned Assad the violence must stop. Britain said it was shocked by the reports and urged Syria to “end immediately its brutal violence against civilians”.

Events in Syria are hard to verify because authorities, who say they are battling terrorists who have killed more than 1,100 soldiers and police, have banned most independent reporting.

Tuesday’s bloodshed brought the death toll reported by activists in the last 48 hours to over 200.

The main opposition Syrian National Council said “gruesome murders” were carried out, including the beheading of a local imam, and demanded international action to protect civilians.

The escalating death toll in nine months of popular unrest has raised the spectre of civil war in Syria with Assad, 46, still trying to stamp out protests with troops and tanks despite international sanctions imposed to push him onto a reform path.

Idlib, a northwestern province bordering Turkey, has been a hotbed of protest during the revolt, inspired by uprisings across the Arab world this year, and has also seen increasing attacks by armed insurgents against his forces.

The Observatory said rebels had damaged or destroyed 17 military vehicles in Idlib since Sunday while in the southern province of Deraa violence continued on Wednesday.

Tanks entered the town of Dael, the British-based group said, leading to clashes in which 15 security force members were killed. Six army defectors and a civilian also died and dozens of civilians were wounded, it said.

The Syrian National Council said 250 people had been killed on Monday and Tuesday in “bloody massacres”, and that the Arab League and United Nations must protect civilians.

It demanded “an emergency U.N. Security Council session to discuss the (Assad) regime’s massacres in Jabal al-Zawiyah, Idlib and Homs, in particular” and called for “safe zones” to be set up under international protection.

It also said those regions should be declared disaster areas and urged the International Red Crescent and other relief organisations to provide humanitarian aid.

White House press secretary Jay Carney said unless Damascus complied fully with the Arab League plan to end the violence, “additional steps” would be taken against it. Washington and the European Union have already imposed sanctions on Syria.

“Bashar al-Assad should have no doubt that the world is watching, and neither the international community no the Syria people accept his legitimacy,” he said.

Arab League Secretary-General Nabil Elaraby said on Tuesday that an advance observer team would go to Syria on Thursday to prepare the way for 150 monitors due to arrive by end-December.

Syria stalled for weeks before signing a protocol on Monday to admit the monitors, who will check its compliance with the plan mandating an end to violence, withdrawal of troops from the streets, release of prisoners and dialogue with the opposition.

Syrian officials say over 1,000 prisoners have been freed since the plan was agreed six weeks ago and that the army has pulled out of cities. The government promised a parliamentary election early next year as well as constitutional reform which might loosen the ruling Baath Party’s grip on power.

Syrian pro-democracy activists are deeply sceptical about Assad’s commitment to the plan, which, if implemented, could embolden demonstrators demanding an end to his 11-year rule, which followed three decades of domination by his father.

Assad is from Syria’s minority Alawite sect, an offshoot of Shi’ite Islam, and Alawites hold many senior posts in the army which he has deployed to crush the mainly Sunni Muslim protests.

In a show of military power, state television broadcast footage of live-fire exercises held by the navy and air force, which it said aimed at deterring any attack on Syria.

The United Nations has said more than 5,000 people have been killed in Syria since anti-Assad protests broke out in March.

Arab, U.S. and European sanctions combined with the unrest have sent the economy into sharp decline. The Syrian pound fell nearly 2 percent on Tuesday to more than 55 pounds per dollar, 17 percent down from the official rate before the unrest.

Arab rulers are keen to prevent a descent into civil war in Syria that could affect a region already riven by rivalry between non-Arab Shi’ite Muslim power Iran and Sunni Muslim Arab heavyweights such as Saudi Arabia.