A 32-year-old mother from France is set to become the first woman ever to be sent to prison for wearing an Islamic veil.

Hind Ahmas refuses to accept the legitimacy of a Paris court which has ordered her to spend 15 days learning her civic duties.

She was sentenced by magistrates in Meaux, a Paris suburb, yesterday – after being arrested wearing an outlawed veil outside the Elysee Palace in the French capital on April 11. 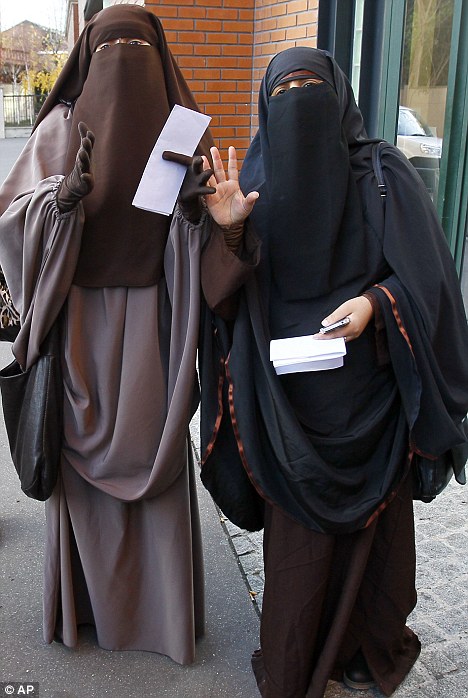 Facing jail: Hind Ahmas, left, could be sentenced to two years in prison for wearing a banned Islamic head covering in France

That was shortly after Nicolas Sarkozy’s government introduced a ban on all forms of Islamic head coverings, including the niqab and the burka.

Ahmas was not allowed into the hearing at Meaux Criminal Court because she refused to remove her face covering.

But prosecutors made it clear to her lawyer, Gilles Devers, that Ahmas now faces two years in prison and a £27,000 fine.

‘There is no possibility of me removing the veil,’ Ahmas said.

‘I’m not taking it off. The judge needs citizenship lessons, not me.’

Ahmas, who has already refused to pay a fine of around £100 for wearing a veil on another occasion, intends to take her case to the European Court of Human Rights.

She has launched a pressure group, Do Not Touch My Constitution, along with Kenza Drider, another veil wearer who wants to run for president in the Spring. 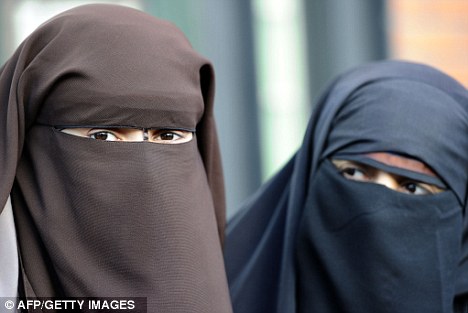 If Ahmas does become the first woman in the world to go to prison for wearing a veil, then it will be seen as a huge propaganda coup for Islamic-rights campaigners.

Mr Sarkozy said the ban on head coverings was not aimed at persecuting Muslims, but merely to make France a more tolerant, inclusive society.

When it was introduced, he said the ban was aimed at stopping criminals – from terrorists to shoplifters – disguising their faces from security staff and CCTV.

But the sight of a young mother being led away to the cells merely because she refuses to take off her veil will cause outrage around the world.

Mr Devers said the veil ban was ‘unconstitutional’, while senior police officers have told judges that it is unenforceable without persecuting women.

France became the first country in Europe to outlaw the veil, while similar legislation has since been passed in Belgium and Holland.

One has been mooted in Britain by a number of politicians, including Conservative backbenchers, but there are no immediate plans to introduce one.

One thought on “French mother, 32, set to become first woman to be jailed for wearing banned Islamic veil”