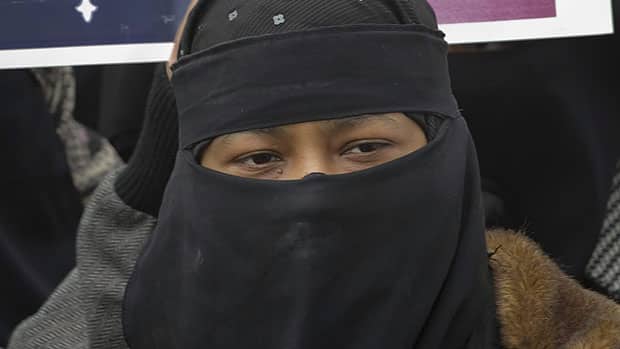 A woman wearing a niqab demonstrates against Quebec’s Bill 94 requiring people to uncover their faces to receive government services, in April 2010. Federal Immigration Minister Jason Kenney said Monday a similar rule is in place to take an oath of citizenship.

The government is placing a ban on face coverings such as niqabs for people swearing their oath of citizenship, Immigration Minister Jason Kenney said Monday.

As a result, Muslim women will have to remove their niqabs or any other face-covering garments, such as burkas, before they can recite the oath of citizenship to become Canadians. Citizenship judges will be directed to enforce the rules at ceremonies over which they preside.

It’s a “public declaration that you are joining the Canadian family and it must be taken freely and openly,” he said, calling it “frankly, bizarre” that women were allowed to wear face veils while they swear their citizenship oaths.

Kenney said he doesn’t accept that it’s a religious obligation to wear the veil, explaining that when Muslim women perform the hajj, the pilgrimage to Mecca required by their faith, they are required not to cover their faces.

“It’s a cultural tradition, which I think reflects a certain view about women that we don’t accept in Canada. We want women to be full and equal members of Canadian society and certainly when they’re taking the citizenship oath, that’s the right place to start,” Kenney said in an interview on CBC News Network.

Kenney said he’s had complaints from MPs and citizenship court judges that it’s hard to tell whether people with their faces covered are actually reciting the oath of citizenship, which he says is a requirement to become Canadian. Wladyslaw Lizon, a Conservative MP from Mississauga, Ont., brought it to his attention, Kenney says.

“We cannot have two classes of citizenship ceremonies. Canadian citizenship is not just about the right to carry a passport and to vote,” he said.

Citizenship and immigration officials will be asking that “all those taking the oath do so openly,” Kenney said, describing it as a “deep principle that goes to the heart of our values.”

Kenney is in Montreal meeting with cultural groups and delivering a speech on the value of Canadian citizenship.

On Thursday, the Supreme Court heard arguments in a case where a woman wants to testify in court while wearing a niqab. The complainant argued her right to wear the niqab is protected by the Charter of Rights and Freedoms.