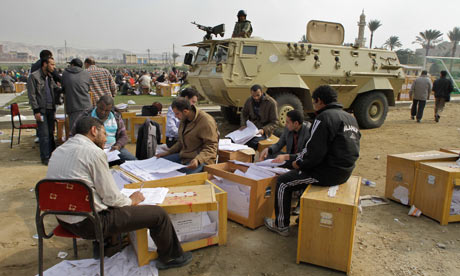 Political Islamists look likely to dominate Egypt‘s first post-Mubarak parliament after sweeping victories for religious parties in the first round of elections.

With preliminary results beginning to trickle through from Cairo, Alexandria and seven other regions, the Muslim Brotherhood‘s Freedom and Justice party appears on course to emerge as the biggest single winner, with some analysts estimating they will capture about 40% of seats in the new legislature. Al-Nour, a more conservative Salafist party, looks likely to secure second place.

Despite some notable individual triumphs, Egypt’s liberal and leftist political forces appear to have fallen short compared with their rivals, though the Egyptian Bloc – a largely secular alliance headed by the billionaire telecoms tycoon Naguib Sawiris – will be encouraged by its strong showing in certain districts in the capital.

Official results from the first round will not be announced until Thursday , before a series of runoff ballots on Monday next week. Under a complex electoral system, the country is heading to the polls in three regional phases, with final results for the lower house of parliament to be revealed on 13 January and for the upper house on 14 March.

Some Egyptians took to social media sites to express alarm at the prospect of an Islamist-dominated parliament. But experts in political Islam, such as Khalil al-Anani, a political researcher at Durham University, argued the Islamists are not a monolithic bloc and fear of them mainly stems from the legacy of Hosni Mubarak, who used the “scarecrow” of religious politics to justify his own repressive rule.

“This is the result we would have seen had genuine democratic elections been held at any time since the last revolution in 1952,” Anani said. “We are talking about a very strong and well-organised social movement which has been working on the street for decades and making the effort to address people’s needs rather than push its own ideology.

“It’s a defining moment in modern Egyptian history because it’s the first time that Islamist parties will have the upper hand in the realm of formal politics, which is a pattern being repeated in Tunisia, Morocco and maybe Yemen too,” he added. “Islamists are moving from opposition to power, and although it offers them an opportunity it also presents them with an immense challenge in terms of how they will handle these new responsibilities as they move from the political fringes to the political centre.

“In Egypt, for example, the Brotherhood will have to pull off a difficult balancing act in terms of maintaining credibility with the military council and its own supporters, and we don’t yet know what the internal impact of that dilemma will be.”

Taking place against the backdrop of renewed street clashes between revolutionaries and security forces that left more than 40 dead and thousands injured, there was widespread relief that the first round of polling involved little serious violence. Instead, a higher than expected turnout saw millions of Egyptians queuing for hours to cast their ballot, and despite multiple reports of local violations there was no evidence of the systematic vote-rigging that became a hallmark of sham elections under the Mubarak regime.

The military council congratulated itself on the smooth running of the poll, with Major General Ismail Etman comparing the organisation of the elections to Egypt’s war with Israel in 1973, and claiming: “When we plan, we execute and, in the end, we succeed.”

But just moments after polling stations closed on Tuesday night, fresh fighting broke out in central Cairo between pro-junta attackers and protesters camped in Tahrir Square.The Ministry of Health said that more than 100 people had been injured and 10 were in a critical condition.

“Thugs are now attacking the protesters in Tahrir,” said former UN nuclear weapons chief Mohamed ElBaradei. “A regime that cannot protect its citizens is a regime that has failed in performing its basic function.”

Meanwhile Alaa Abd El Fattah, a leading critic of army rule who was jailed by a military tribunal last month and has since become a rallying figure for anti-junta demonstrators, saw his detention extended for at least another fifteen days. He and a series of co-defendants now stand accused of participating in an illegal assembly, endangering public peace with the intention to commit crimes including murder, possession of weapons and the attempt to storm a public building with violence.

The United Nations and numerous human rights organisations have described Abd El Fattah’s incarceration as politically-motivated and have called on the junta to release him.