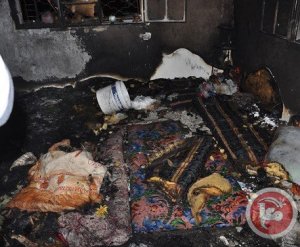 TULKAREM (Ma’an) — Five children from one family were killed early Saturday after fire ripped through their house in the northern West Bank village of Qaffin.

The children, aged between five and twelve, died in their first floor bedroom after candles were lit in the room before they went to sleep, Palestinian civil defense service said in a media release.

Their father, Bassam Tawfiq Hirsha, and his wife were also injured in the blaze as they tried to rescue their children.

Neighbors alerted civil defense, but when fire fighters and police arrived at the north Tulkarem village, Hirsha’s daughters Aseel and Suheir, and sons Ahmad, Mahmoud and Mumen were found dead.

The parents were taken to hospital, the release added.