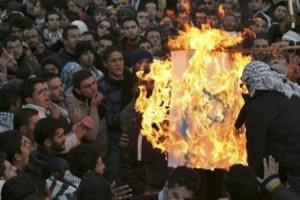 Thousands of Jordanians have rallied near the Israeli border to protest against the construction of Jewish settlements in al-Quds (Jerusalem).

More than 7,000 Jordanians from all over the kingdom have gathered in the town of Sweimeh in the Jordan Valley, a few kilometers from the Israeli-occupied West Bank, on Friday to condemn Israel’s settlement expansion activities on Palestinian lands.

They also called for the liberation of al-Quds, home to the al-Aqsa Mosque, which is the second holiest site for Muslims.

“We sacrifice our souls and blood for al-Aqsa Mosque and al-Quds,” they chanted after the noon prayers.

The demonstrators also set an Israeli flag ablaze and called on Jordanian authorities to scrap its peace treaty with Israel.

The rally was organized by the Muslim Brotherhood movement in a bid to shed light on Israel’s settlement expansion activities in East al-Quds, which Israel occupied in 1967 and later annexed in a move not recognized by the international community.

They also urged the government of Prime Minister Awn al-Khasawneh to step down.

Jordanians have been holding street protests demanding the election of the prime minister by popular vote and an end to corruption since January. There have been no calls for the removal of King Abdullah II.

Since the beginning of protest rallies, the Jordanian ruler has sacked two prime ministers in a bid to avoid more protests. Awn al-Khasawneh, a judge at International Court of Justice, is Jordan’s third premier this year.

The king has also amended 42 articles in the 60-year-old constitution, giving parliament a stronger role in decision-making.