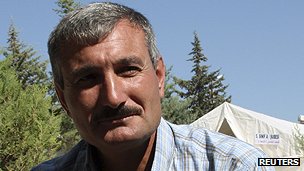 Tracking down and interviewing Colonel Riyad al-Asad close to Turkey’s border with Syria is not an easy business.

The colonel’s name sounds close to but not quite the same as that of the President he wants to overthrow, Bashar al-Assad.

He is based in a refugee camp at Apaydin, 9 miles (14km) from the town of Antakya and very close to the Syrian border. But he is not allowed to leave the camp, and cannot receive visitors.

To a considerable extent, this is for his own protection. The Turks seem to regard Colonel Asad as a potentially important figure for the future, and are determined that nothing untoward should happen to him.

Nor is this just a theoretical worry. Two months ago another Syrian colonel who had defected left a neighbouring camp where he was living and went shopping in a nearby town. He vanished there.

The strong assumption is that he was kidnapped by Syrian agents and smuggled back across the border. Most of the Syrian refugees I spoke to about it thought he would already be dead.

As a result, getting to see Colonel Asad is remarkably difficult. No Turkish official wanted to help us, or indeed even speak about him on the record.

The Syrian nation is determined to bring this dictator down”

As we were filming his camp from a distance a group of Turkish soldiers arrested us, and only the intervention of a local judge freed us.

Yet the colonel is predictably keen to talk, and in the end we interviewed him via the internet.

It was a distinctly bizarre affair: in the gathering darkness we had to set up our computer and a small satellite dish in a farmyard close to the camp, and spoke to him by means of Skype.

Colonel Asad, with his impressive military moustache, seemed self-possessed and articulate in his denunciation of his near-namesake’s regime.

He is in almost hourly contact with groups of disaffected soldiers inside Syria, and claims to have a clear awareness of the situation there. 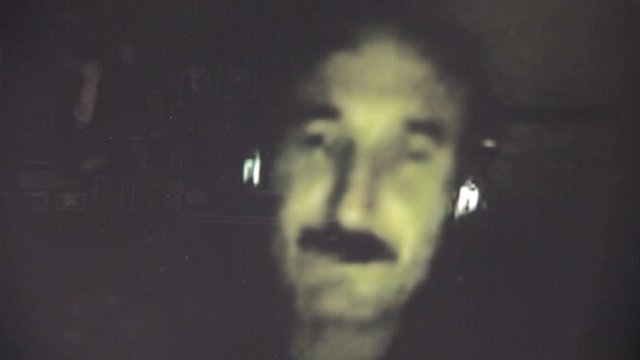 “We assure everyone that the president of Syria is finished,” he said.

“The Syrian nation is determined to bring this dictator down.”

This is the kind of thing that rebels habitually say, of course, and it does not always happen – even during the Arab Spring.

Nevertheless people who know and have met President Assad often remark on his gentleness of character; he was, of course a practising ophthalmologist, and doctors rarely seem to make good dictators.

There has been a good deal of speculation in the West, as well as the Middle East, that President Assad is not happy with the butcher’s work he has felt obliged to do, and that at some stage he will look for a way out.

Colonel Asad certainly seems to believe this. I asked him when he thought the regime would fall.

“Inshallah, inshallah [God willing], very soon. The system is rotten to the core. It may look strong on the outside, but at the heart it’s weak.” 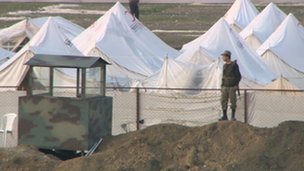 “Everyone in Syria knows this, so it will happen very soon, inshallah,” he says.

We shall see. It seems unlikely to happen without a good deal more fighting, and for that Colonel Asad’s force will have to be a good deal bigger and more effective than it is at present.

How many soldiers are in a state of mutiny inside Syria is unknown, but the colonel has no more than a hundred or so defectors with him in the camp at Apaydin; though groups of soldiers, in twos and threes, are coming across the border almost every day now.

By no means all of them are keen to join a civil war against the Assad regime.

Indeed, many of them have only left Syria in order to avoid further violence, and as our experience in trying to contact Colonel Asad indicated, it is not always easy for Syrian defectors to get around as they choose, especially if they want to go back across the border.

Still, there is continuing violence inside Syria between the army and those soldiers who cannot stomach the orders to shoot down their fellow-citizens.

Has a civil war begun in Syria? Plenty of people have suggested that it has.

I had the impression that Colonel al-Asad does not necessarily agree – at the moment. But with more than 3,500 people killed, and growing numbers of soldiers angry with the repression they have been obliged to support, the time could soon come when it will turn into civil war.

And then Colonel Riyad al-Asad will want to play a big part in it.