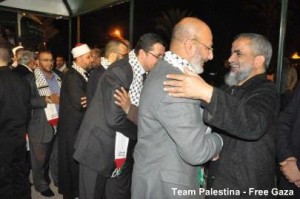 Arrived this evening, a convoy of Arab spring into the Gaza Strip via the Rafah crossing with the President of the Association of Sunni scholars, Dr. Safwat Hijazi and Dr. Salah Sultan, scientists, thinkers and Mmthleean revolutions Arab from Egypt, Tunisia, Libya and the European Parliament came from forty countries in the world. The delegation held a press conference the convoy at the Rafah crossing which it welcomed the First Deputy Chairman of the Legislative Council, Dr. Ahmed Bahar, the convoy, stressing that the Gaza Strip steadfastness in the siege became a mecca for free to the world. He called the Sea of the world to stand by his people oppressed by the Zionist occupation and to come to Gaza to see the scale of the suffering experienced by the sector. During his speech, Dr. Safwat Hijazi was happy to come to Gaza, saying: “This is a historic moment for so long prevented us from under the regime of former Egyptian Today we achieve our wish to come to the Gaza Strip.” He stressed that Gaza and its steadfastness in the siege and the war was inspiring the Arab world in the rebellions against the rulers of darkness, explaining that the Arab peoples aspiring to freedom after she saw in Gaza during the showpiece of steadfastness in the face of the most powerful military arsenal in the Middle East. He said: “We came in solidarity with Gaza, tomorrow Jerusalem will come to open and put a platform in the Salah al-Din Al-Aqsa, God willing.” He added: “I say to the United Nations and the world, if you have decided that the blockade on Gaza illegal, we on behalf of our people and we have 40 different countries that say you have fallen Chereitkm” The organizers of the convoy in the word Arab spring The President of the European campaign to lift the siege of Gaza, Mr. Arafat’s past they have made and will make every effort to do what is required of them towards the just Palestinian cause. He added that they represent Palestine and Anasrunha the whereabouts and will not spare no effort to do so, pointing out that the convoy bore the name of Arab spring to draw world attention to the besieged Gaza Strip and the suffering and say to the international community, which stood by the Arab peoples in revolutions should look at Gaza and Tsanduha . Shouted several of the speakers during the conference, Freedom for Palestine denouncing the Zionist occupation continues its criminality against the Palestinian people.