The Tunisian press has found itself under increasing scrutiny for the lingering presence of ties to the old regime.

The National Union of Journalists announced plans to publish a “blacklist” of names of journalists known by the group to be corrupted by involvement with ex-leader Zine El Abidine’s propaganda ministry.

At the same time, the Tunisian newspaper Al Maghreb, banned under Ben Ali because of its affiliation with Habib Bourguiba’s regime, published last week a list of the sums of money each major Tunisian newspaper received from the same propaganda ministry, called the ATCE in its French acronym. Some major papers received amounts equaling three quarters of a million dollars a year, a significant amount in a country where the average yearly salary is just over 4,000 USD.

The stirrings of a reformist purge provoked defensive reactions from Tunisia’s press establishment.

“The publication of these figures has not been put in context,” said Sofien Ben Farhat, an editor for the French language daily La Presse, recipient of over 750,000 USD a year from the ATCE.

“The only newspaper that didn’t receive money from the regime is Al Mawkef,” he went on, referring to the press organ of a dissident party. “All the other newspapers received money from the ATCE. We can’t possibly shut down all these newspapers; we need to move on.”

The highest amount received by a private Arabic-language newspaper was the 750,000 USD a year given to Assabah, one of Tunisia’s most widely-read dailies. Saleh Atia, an editor for the paper, expressed a similar attitude to that held by Farhat, stressing the fact that Assabah was far from the only paper to receive money from the state propaganda agency.

Perhaps even more upsetting to the Tunisian journalistic status quo will be the National Journalist Union’s report on corrupt journalists. The Ben Ali administration used a variety of techniques to control national media, including embedding ATCE agents as fake reporters throughout the press. Many of these agents still hold their posts, spies without a state to spy for.

Atia was all for the blacklist, and even urged the union to go further, stating, “The union has to be really courageous and follow up the publication of the list by withdrawing the press credentials from the journalists involved and taking back the money that they got [from the ATCE].”

At the same time, the editor sought to underline the distinction between the actions of individual actors and the organizations that employed them.

“Any institution may have a number of corrupted employees. That does not mean that the whole institution is corrupt or that its credibility is automatically harmed by it. If we were to denounce all the newspapers that were involved with the Ben Ali regime we wouldn’t have many of them left,” said Atia.

Ben Farhat of La Presse was also supportive of the list, but fearful that the process could turn into a form of vigilante justice, and advocated passing through the courts before publishing names.

“It needs to have a judicial aspect; these cases need be taken to the court. The court will make sure that it doesn’t turn into a witch hunt,” said Farhat.

Among other events, the committee will investigate the circumstances of the “putsch” orchestrated against the union’s executive board in 2009, when Ben Ali agents attempted a takeover of the organization.

CAIRO (AFP) — Egyptian Islamists will hold a mass rally on Friday to protest a government draft of a basic constitution they say should be left to an elected parliament, a leading Islamist group announced on Wednesday.

The Muslim Brotherhood, the country’s best organized movement, said on its website it would hold the rally after the government went ahead with its plan to draft overarching constitutional principles.

The principles, which would bind a panel appointed by parliament that Islamists hope to dominate, were demanded by liberal and secular groups. A three-stage parliamentary election will start on November 28.

The government’s draft drew fire from most quarters for including clauses that removed the ruling military’s budget from parliamentary oversight and allowed the military final say on military-related laws.

The government revised the draft, but the Islamists, who organized a mass protest in July against such a charter, have rejected the very idea of a document that would limit parliament’s authority to draft the constitution.

“The cabinet is clinging on to undemocratic articles, so we have no choice but to stage a million person march to defend democracy on Friday,” the Brotherhood said.

The Brotherhood, through its Freedom and Justice Party, may emerge as the largest bloc in the election, the first since an uprising ousted president Hosni Mubarak in February.

The military, which took charge after Mubarak’s ouster and suspended the constitution and parliament, says it will hand over power once a president is elected. 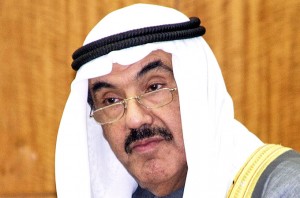 “Now, we have entered the house of the people,” said Mussallam al-Barrak, who led the protest along with several other politicians and youth activists also calling for the dissolution of parliament over alleged corruption.

The demonstrators broke open the parliament’s gates and entered the main chamber, where they sang the national anthem and left after a few minutes.

The police had used batons to prevent protesters from marching to the residence of the prime minister, a senior member of the ruling family, after staging a rally outside parliament.

Witnesses said at least five demonstrators were injured and treated on the site.

Some activists said they will continue to camp outside parliament until the Al-Sabah is sacked.

Tension has been building in Kuwait over the past three months after it was alleged that about 16 MPs in the 50-member parliament received about $350m in bribes.

The opposition has been leading a campaign to oust the premier, whom they accuse of failing to run the wealthy nation and fight corruption, which has become wide-spread.

Earlier on Wednesday, about 20 opposition lawmakers boycotted a parliamentary session, a day after the government and its supporters succeeded in rejecting a bid by the opposition to quiz the premier over allegations of corruption.

The premier, 71, has been a target of opposition criticism since he was appointed to the job in February 2006, forcing him to resign six times.

Parliament has also been dissolved three times in the same period.

Thousands of Kuwaitis have stormed the parliament in the capital after security forces beat up protesters who marched towards the prime minister’s home to call for his resignation.

Speaking at a meeting of the Parliament’s Foreign Affairs and Defense Committee on Tuesday, Gantz said the point at which a military operation would become necessary was “drawing closer.”
The general noted that Israel would not be “dragged into” an operation in the coastal enclave, but would rather initiate an orderly one, Israeli newspaper Haaretz reported.
Earlier this month, a top Israeli military official announced that the Israeli regime has given the green light to the military to prepare for a ground offensive against the Gaza Strip.
Tel Aviv claims the move is aimed at halting rocket fire from the besieged coastal strip.
The Israeli regime launched a three-week onslaught on Gaza at the turn of 2008, killing more than 1,400 Palestinians, most of them women and children. The war also left many homes and parts of Gaza’s civil infrastructure in ruins.
Since then, Israel has regularly carried out deadly airstrikes on the besieged coastal enclave.