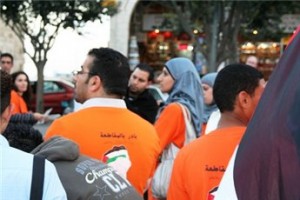 BETHLEHEM (Ma’an) — Campaigners passed out leaflets and erected posters in central Bethlehem on Sunday in a new push to boycott Israeli products.

The boycott seeks to show that “all sectors of the Palestinian people should partake in popular resistance, which is an important strategy towards ending occupation and getting rid of (Israeli) settlers in order to establish an independent Palestinian state,” Mazin Al-Azza, campaign coordinator in Bethlehem, said in a statement.

ISI Director Fadi Kattan said it was time for Palestinians to stop paying money that is used by people “who kill Palestinians and confiscate their lands,” the statement continued.

The boycott targets “Israeli products whose profits support the occupation,” he added.