A draft report by a key UN Security Council committee declared that members could not reach consensus on whether Palestine should be accepted as a UN member state. 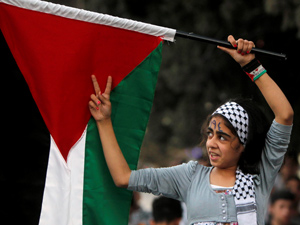 “The committee was unable to make a unanimous recommendation to the Security Council,” said the draft report of the council’s committee on admitting new member states, circulated to all 15 Security Council members.

The four-page draft appears to confirm that the Palestinian move to join the world body as a full member, which Western envoys said was doomed from the outset due to a US vow to veto it if it ever came to a vote in the council, is set to fail due to the council’s unresolvable deadlock.

Although it is the UN General Assembly that makes decisions on UN membership, an applicant state needs prior Security Council approval before it can go to the assembly.

Palestinian President Mahmoud Abbas applied for full UN membership for the state of Palestine on Sept. 23.

The Palestinians can still call for a vote in the Security Council, but UN diplomats said on condition of anonymity that it is not clear whether they will do so given that Washington will likely not even need to use its veto to block it.

The Palestinians would score a moral victory and force Washington to cast its veto if they are able to muster nine votes to support them in the council. A council resolution needs nine votes in favor and no vetoes to pass.

But UN diplomats say the Palestinians have so far secured only eight backers.

The draft report details how the council is divided into three groups – those planning to support the Palestinian bid, those opposing it and those planning to abstain from any vote on it. It does not identify the countries.

The draft says some countries support “as an intermediate step, (that) the General Assembly should adopt a resolution by which Palestine would be made an Observer State.”

The Palestinians already have status as an observer “entity,” but have suggested they might seek upgrading that status to that of a non-member observer state, like the Vatican. Such enhanced status would give them a higher profile and implicitly recognize Palestine as a state.

Council diplomats said that at a meeting last week Russia, China, Brazil, India, Lebanon and South Africa supported the Palestinian bid, the United States opposed it, and Britain, France and Colombia said they would abstain if there were a vote.

Both the United States and Israel say the Palestinian push in the United Nations is unilateral and an attempt to bypass peace talks, whose resumption Abbas has conditioned on an Israeli freeze of settlement activity in occupied territory.

The Palestinians say those negotiations have failed to bring them closer to the independent state they seek in the West Bank, East Jerusalem and the Gaza Strip. They say it is time to try a different approach.

The committee’s report may be revised before it is formally presented to the Security Council on Friday, envoys said.