US and EU try to delay vote, which is part of attempt to push campaign for an independent state on to international stage 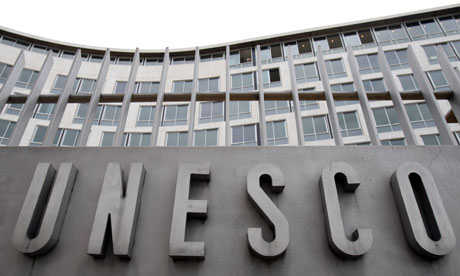 US and EU diplomats are attempting to delay a vote on Palestinian membership of Unesco.

The Palestinians will renew their bid for recognition in the international arena by requesting full membership of Unesco on Monday in the face of threats by the US to withdraw its funding of the agency if it votes in favour.

US and European Union diplomats are attempting to delay a vote on Palestinian membership of the United Nations‘ cultural, scientific and educational agency at its annual meeting in Paris.

Unlike the UN security council, which is considering a separate application by the Palestinians for full membership, no country has the power of veto at Unesco. The Palestinians are expected to win the necessary two-thirds majority of the 193 member states if a vote is taken.

The move is part of the Palestinians’ campaign to take the demand for an independent state on to the international stage in the face of what they see as Israel‘s refusal to engage in meaningful negotiations.

The US and the EU insist that only a negotiated agreement between Israel and the Palestinians can produce a viable state and are trying to get talks between the two parties back on track.

Full membership of Unesco would allow the Palestinian Authority to seek the agency’s protection of historical and cultural sites, some of which are in East Jerusalem, which was captured by Israel in 1967 and later annexed. The Palestinians currently have observer status.

The US – which has pledged to veto the Palestinian’s application at the UN security council – is opposed to the Unesco move, saying it would have “serious repercussions”.

A state department spokeswoman, Victoria Nuland, said last week: “We’ve made the point that there are very clear red lines in US legislation.”

She was referring to a law passed by Congress in 1990 forbidding the funding of any UN agency that gave the Palestine Liberation Organisation the same standing as a member state. The US contributes about $70m (£43m), or 22%, of Unesco’s annual budget.

Unesco’s executive board last week approved putting the Palestinian request to a vote of all 193 members of its general conference, which has convened in Paris. Four out of 58 countries on the executive – the US, Germany, Romania and Latvia – opposed the move, and 14 – mainly EU countries – abstained. The vote at the general conference is expected on Monday.

The US and the EU are thought to be pressing for a delay in the vote, or in the implementation of a vote, as a way of deflecting a potential funding crisis for Unesco and possible punitive action by Israel against the Palestinian Authority.

“We hope that we will succeed in this effort despite our recognition of great pressure which the United States of America is leading inside Unesco,” Riyal al-Malki, the Palestinian foreign minister, said last week.