The Ministerial Committee of the Arab Initiative for Peace, chaired by HE the Prime Minister and Foreign Minister Sheikh Hamad bin Jassim bin Jabor al-Thani, yesterday stressed on the necessity of continuous mobilisation of support to Palestine’s UN statehood bid.
The committee, which met in Doha with participation of Palestinian President Mahmoud Abbas, decided to continue supporting the Palestinian bid for full membership in Unesco.
It also decided to study all the legal and political alternatives based on the General Assembly’s position regarding the Palestinian bid.
Arab foreign ministers said in a statement that they would call on the Middle East Quartet, through the General Assembly, to stand in the face of the Israeli illegal settlement policies. They will also ask the Quartet to continue its efforts to bring Israel back to the negotiating table with a clear deadline and pre-conditions that are based on international legitimacy.
The committee discussed the recent Israeli aggression in the Gaza Strip, in which many civilians were killed and wounded.
It strongly condemned the aggression and urged the international community to shoulder its responsibilities towards the Israeli violations and take action to lift the unjust siege being imposed on Gaza Strip.
The committee stressed its full support to the Palestinian reconciliation between Hamas and Fatah.
The ministerial meeting was also attended by the Arab League Secretary-General Dr. Nabil el-Arabi and a number of foreign ministers and representatives of member countries.
The Arab Peace Initiative Committee includes Qatar, as the Chair-state; Egypt, Palestine, Jordan, Bahrain and Saudi Arabia, Syria, Lebanon, Morocco, Yemen, Algeria, Tunisia, Sudan and the Arab League Secretary-General.

Qassam exploded in the western Negev. No injuries or damages

Latest raid was in East #Gaza. Initial reports say it fell in an empty area. #Gaza

URGENT 2ALL ▶ #GAZA UNDER ATTACK, help us RT news out: To follow #palestine tweeps: list curated by @olananhttp://bit.ly/qmPhwz | RT!

Damn you #israel! – AND Every israeli who looks the other way and does not stand against Zionists! #Pray4Gaza #Gaza #Palestine #HRW

What it’s like to have drones in your bones:http://www.shawermarepublic.com/ #gaza

Tunisia, the prime mover of the Arab Spring, had its first democratic outcome: Last weekend, this small Arab nation held free and fair elections, which had been only a dream under the tyranny of its former dictator, the all-secular Zine El Abidine Ben Ali. Moreover, the winner turned out to be the Islamic-inspired party that the same Ben Ali brutally suppressed for decades: the Renaissance Party, or, with its original name, Ennahda.

I am sure some eyebrows are now raised in the West, and elsewhere, for Ennahda is defined as an “Islamist” party, which might, say, ban alcohol, put women in burqas and chop off hands and heads. But that really does not seem to be what the party aspires to. Right after its election victory, Ennahda’s second figure, Hamadi Jebali, who is also the candidate to be the next prime minister, dismissed such fears. He said that if Ennahda comes to power, “individual liberties [will be] granted for foreigners and Tunisians alike.” Among these liberties, he explicitly said, are things like wearing bikinis, drinking alcohol or doing “non-Islamic” (i.e. interest-based) banking.

There are good reasons to believe that Ennahda will keep these promises if it comes to power, for its main leader, Rached Ghannouchi, is a thinker who has long reconciled Islam and freedom. Unlike radical Islamist thinkers such as Sayyid Qutb, from which he was influenced initially, Mr. Ghannouchi growingly synthesized Islam not with a totalitarian but a democratic vision.

So, as early as the 1980s, Ghannouchi began advocating “the end of single-party politics and the acceptance of political pluralism and democracy.” He defended women’s rights and education, along with equal rights for non-Muslim citizens.

Yet none of that saved Mr. Ghannouchi and his party from the wrath of the Ben Ali regime, whose secularism was simply an anti-religious madness. People could be arrested simply for frequenting mosques. Members of Ennahda, including Ghannouchi himself, were jailed and tortured. Many of them had to flee to Europe to save their lives and freedom.

With all that terrible history of secular dictatorship, Tunisia is very similar to Turkey: Both countries have suffered from not Islamic but secular fundamentalism, which they imported from France, but took it to even worse extremes. In both countries, for example, the headscarf was banned in the public square and veiled women were degraded to second-class citizens.

But just like in Turkey, democracy in Tunisia brought an end to secular dictatorship. The end of the Ben Ali regime in Tunis, in other words, is not too unlike the end of the Kemalist regime in Ankara. In both cases, powerful oligarchies who positioned themselves against religion were overthrown by masses that aspired for freedom, including freedom of religion.

Similarly, it is not only significant but also telling that Ennahda spokesmen have repeatedly said that they take Turkey’s incumbent Justice and Development Party (AKP) as their “example.” Ironically, Ennahda’s secularist rivals, the leftovers of the Ben Ali regime, seem to have taken an example from Turkey as well: Just like the Kemalists, all they did during their campaign was fear mongering about “the Islamists.” And, again, just like the Kemalists, they terribly failed.

Of course, it is time now for Ennahda to work toward forming a stable government and disproving the fears that secularists pump and some secular people probably genuinely have. If they can be successful in both and form a government that will bring more freedom and prosperity to Tunisia, they will have replicated the “AKP model” in the Arab world. As the initiators of the Arab Spring, and as the heir of a liberal Islamic tradition that dates back to the 19th century, they are simply the perfect people to do that.

Arab League representatives are scheduled to meet Sunday with Syria’s foreign minister to demand an end to killings of civilians during the government’s crackdown on an opposition uprising.

The Arab League ministerial delegation was due to hold talks with Syrian Foreign Minister Walid al-Moallem in the Qatari capital, Doha. The 22-member Arab bloc sharpened its criticism of Syria after rights activists said Syrian security forces shot and killed dozens of anti-government protesters on Friday.

Many of the protesters were calling on the West to impose a no-fly zone over Syria to protect them from government attacks. NATO airstrikes helped a Libyan uprising topple Moammar Gadhafi earlier this year, but the alliance has shown little appetite for a similar mission in Syria.

Syrian President Bashar al-Assad told a British newspaper that any Western intervention in Syria will cause an “earthquake” and turn his country into what he called “another Afghanistan.” In the interview with the Sunday Telegraph, he said any plan to “divide Syria” will divide the whole region.

Rights activists say at least 90 people were killed in uprising-related violence in Syria on Friday and Saturday, marking one of the bloodiest periods in the country since the anti-Assad rebellion began in March.

The activists say the dead include 45 civilians and 47 security personnel killed in fighting with army deserters in the provinces of Homs and Idlib. One army defector also was killed. There was no independent confirmation of the casualties because Syria bars most international journalists from operating in the country.

In a separate interview with Russian state television Sunday, President Assad said Syria has been “relying” on Russian diplomatic support to withstand Western and Arab criticism of the crackdown.

Western nations have placed economic sanctions on Syria to pressure it to stop using force against protesters. But Russia vetoed a European-led effort to secure U.N. Security Council approval for similar sanctions against Damascus. 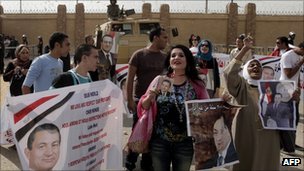 The next session in the trial of  former Egyptian President Hosni Mubarak has been postponed until late December.

The decision follows calls for the appointment of a new presiding judge to replace Ahmed Refax.

Mr Mubarak, 83, is accused of ordering the killing of protesters during the uprising earlier this year which ended his rule. He denies the charges.

His trial is now due to resume on 28 December, two days after a separate court rules on replacing Mr Refaat.

Lawyers for the alleged victims of Mr Mubarak have petitioned the court demanding that the judge be replaced.

In earlier sessions, Mr Refaat defended the court’s integrity and lashed out at critics.

Mr Mubarak, his two sons, the former interior minister and senior police officers – who face a range of charges – were in the Cairo court on Sunday when the judge announced the adjournment. All defendants deny the charges against them.

Riot police have often had to separate anti- and pro-Mubarak crowds who have fought outside the police academy courthouse during the trial.

In mid-August, the judge took the decision to ban live TV coverage, saying he was exasperated by lawyers showing off for the television cameras.

At earlier court hearings, TV images showed Mr Mubarak, who led Egypt for 30 years, in a cage on a sick bed.

UFree have released a hard hitting report summarising the situation faced by Palestinians detained by the Israeli occupation.

The report looks at the breaches of international law by the Israeli authorities; the demographic make up and categories of Palestinian prisoners themselves and the 2011 hunger strike.

It highlights the shocking treatment all Palestinians are subjected to, including women and children. One alarming statistic in the report is that one in every four males in the West Bank and Gaza have experienced imprisonment in Israeli jails – forty percent of all Palestinian men.

The demands of the prisoners on hunger strike shows the barbaric and humiliating treatment of the prisoners – who are asking for basic rights such as: permission for prisoners to be allowed visits from family (in Gaza); children to be allowed to touch their parent without a separation barrier; access to education and medical care and the end of collective punishment.

GAZA CITY (Ma’an) — The Minister of Justice in the Hamas government on Sunday denounced Israeli airstrikes against the coastal enclave and called for Israeli leaders to be tried as “war criminals,” a statement said.

Al-Ghoul condemned the killing of Gaza militants, saying “a crime like this will only increase the stubbornness, stability and resistance of the Palestinian people.”

He called on Arab and Islamic countries, as well as the international community, to put pressure on Israel to end its violent treatment of the Palestinians.

Al-Ghoul also called on the International Criminal Court to pursue Israeli leaders for their violations of international humanitarian law.

If you want to know what it is to be a Palestinian, see this picture.

Every day there are bombs falling, warplanes are flying through the air, drones are coming through

Every day on the run for the warmachines of Israel, the terrorist machines

Every day you are not sure to get the evening alive

Every day suffering for goods you need, no water, nothing to eat and running for the war

The machines from Israel …. that is terrorism ….