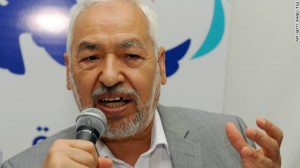 Tunis, Tunisia (CNN) — Official results have yet to be published, but preliminary returns appear to show that the once-banned moderate Islamist party Ennahada has won Tunisia’s historic elections, according to several political parties and Tunisian media outlets.

The front page of El Maghreb newspaper showed a giant photo of Ennahada leader Rachid Ghanouchi next to a saluting member of the presidential guard, with the caption “Ennahada close to the government?”

Representatives from all three parties told CNN their preliminary results show that Ennahada captured first place, followed by CPR and Ettakatol. The parties were already looking forward to the possibility of establishing a governing coalition in the future 217-seat Constituent Assembly.

“It’s possible… I hope we can put a coalition of this type together,” said CPR leader Montsuf Marzouki, when asked about the possibility of establishing a coalition of the three apparent front-runners.

Marzouki said Tunisians had demonstrated in the country’s first free election in modern history their vision for the future of the country.

But the rise of a party closely identified with Islam sounded alarm bells for Tunisian secularists.

Tuesday afternoon, a group of about 200 protesters gathered outside the headquarters of Tunisia’s electoral commission to denounce the expected Ennahada victory.

Some carried signs saying “No to fraud.”