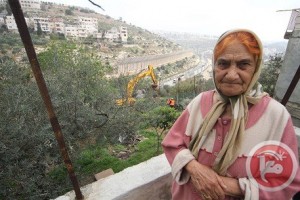 BETHLEHEM (Ma’an) — Israeli forces issued a military order on Sunday to confiscate 37,000 square meters of private land from near the Cremisan Monastery in Beit Jala.

One of the landowners told Ma’an that Israeli forces handed confiscation warrants to him and other farmers on Sunday evening. The land slated for confiscation is used for agricultural cultivation, he said, adding that Israel is annexing the area to construct the separation wall.

Land owners submitted a complaint at the civil administration office in Etzion but it was rejected, the land owner said.

Israel began constructing the separation wall in 2002. It stated that the wall was necessary for security purposes after a number of Palestinian suicide attacks within Israel during the second intifada.

When the 435-mile barrier is complete, however, 85 percent of it will have been built inside the occupied West Bank.  In 2004, the International Court of Justice ruled that the separation wall was illegal and “tantamount to annexation.”

Villages affected by land confiscation as a result of the wall regularly demonstrate as part of a grassroots movement to counter the loss of land and fragmentation of community life.

Walaja village, near Bethlehem, and the villages of Nilin and Bilin near Ramallah, are the most well known examples of regular non-violent protests against the separation wall, although villages across the West Bank resist the annexation of land through popular protest.