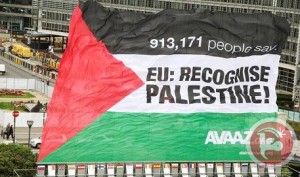 UNITED NATIONS (Reuters) — The quest for UN membership is likely to come to a head on or around Nov. 11, when Security Council ambassadors plan a final meeting to decide their response, diplomats said on Wednesday.

The date represents a delay in dealing with the Palestine application, submitted by President Mahmoud Abbas on Sept. 23, amid hopes that indirect Israeli-Palestinian talks scheduled for next week could get a peace process off the ground.

The Nov. 11 meeting could result in a vote by the divided council, diplomats said.

The United States, which supports its ally Israel in strongly opposing the membership bid, is considered certain to veto it but the PLO may seek a vote anyway if it can show majority support in the council.

The PLO has long held the status of an “observer entity” at the United Nations, but that does not allow it to vote. It says it has now acquired the effective attributes of a state and merit the full UN membership that Israel has.

Membership is formally approved by the 193-nation General Assembly but that requires a Security Council recommendation.

“The 11th (of November) will probably be the end of the Security Council consideration process, one way or the other,” a senior council diplomat said following a meeting of envoys on Tuesday that agreed to a timetable. “If the Palestinians want a vote, there will be a vote.”

Such a request would be channeled through Lebanon, the sole Arab state currently on the 15-nation council.

Under UN rules for applications, council diplomats are currently discussing technical issues of whether Palestine is a state, is “peace-loving,” and willing to fulfill the obligations of the UN charter — all requirements for membership.

But members are expected ultimately to vote on political grounds.

Diplomats said indications so far were that the PLO would push for a vote next month, but that could change if prospects improved for peace negotiations.

International mediators will meet separately with Israeli and Palestinian officials on Oct. 26 in Jerusalem to try to revive direct peace talks that ended more than a year ago.

“If they were to make progress, and there were to be further meetings over the following few days, then obviously that could affect the Security Council timetable,” said the senior diplomat, who asked not to be identified.

Many analysts, however, think a breakthrough is unlikely, with the PLO continuing to reject direct talks unless Israel halts settlement activities in the West Bank and Israel refusing to do so.

While the application looks certain to fail in the council, Abbas has made a major effort to attract nine votes in support — which would oblige the United States to use its veto and be seen by Palestinians as a moral victory. To pass, council resolutions need nine votes and no vetoes.

Diplomats currently expect eight council members to back the Palestinians and six to vote against or abstain. There is uncertainty over Bosnia, the three members of whose collective presidency — Muslim, Serb and Croat — disagree over which way to vote, diplomats say.

If the application fails in the council, the Palestinians could ask the General Assembly to upgrade their status to “nonmember state” observer, which would not require council endorsement. That would imply UN recognition of statehood and could help the PLO join international bodies.