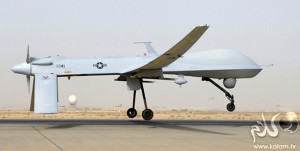 ISLAMABAD: The attack on a compound in South Waziristan Agency on Friday night
that claimed the lives of at least three suspected militants was the 300th drone attack carried out by the US in the Pakistan’s tribal region, according to a report by an independent London-based group of investigative journalists.

The report released on Saturday by Bureau of Investigative Journalism has mentioned varying figures about the casualties in the attacks as it says that at least 2,318 people and a maximum of 2,912 people, the majority of them alleged militants, have been killed in these attacks.

“The US covert drone war in Pakistan reached a new milestone with the 300th attack on alleged militants in the country’s tribal areas,” says the opening of the report, adding that the attack by the Central Investigation Agency (CIA) is the fourth in North and South Waziristan in 48 hours. Of the 300 drone strikes since June 17, 2004, it says, 248 occurred during President Barack Obama’s first three years, rising to a frequency of almost one strike every four days.

Talking to Dawn, the head of the US covert war investigations bureau, Chris Woods, said the data had been drawn from reputable media sources, including international news agencies and credible Pakistani media. Moreover, he said, the data was cross-referenced where possible against leaked US intelligence documents and diplomatic cables. He disclosed that he had visited Pakistan and that the research also included some “commissioned field work in Waziristan.”

Mr Woods said the bureau’s data reflected all known strikes substantiated by multiple credible sources, He said the analysis of CIA drone strikes in Pakistan was based on months of research by a team of journalists.

“The bureau has sought to identify accurately the time, location and likely target of all known attacks to obtain as clear an explanation as possible of what took place during the event and to detail the numbers and names, where possible, of those killed and injured, whether militant or civilian,” he said.

He said the CIA itself recently admitted to killing 2,050 people with its drones, all but 50 of them combatants, after the bureau published its extensive database in August, this year. Despite substantial evidence about the deaths of civilians caused by CIA strikes, he said, the US continued to claim that it had killed no “non-combatants” in Pakistan since May 2010.

Mr Woods said this year alone the CIA had launched 66 drone strikes in Pakistan and had recently resumed drone operations in Yemen. “With the US emphasis shifting away from regular troops and towards covert operations, there remains a critical need for detailed scrutiny of its actions,” he said.

The report says the CIA does not officially acknowledge or comment on its drone campaign, and the Pakistani government does not publish a count of those killed and injured. Instead, the most comprehensive information on casualties lies in the thousands of press reports of drone strikes filed by reputable national and international media since 2004.

Most reports are filed within a day or two of an attack. Sometimes relevant reports can be filed weeks — even years — after the initial strike.