She said, “Aqsa Foundation”: “that during an inspection tour of the cemetery by the Delegation of the institution yesterday revealed that the Cypress large located in the Western South of the remaining cemetery of God – not far from the part that is planning the establishment of the so-called” Museum of Tolerance ” – have been burned significantly, and effects remaining at the site and odors likely that the process of burning was on Wednesday night, as likely that it has this crime are Jewish extremists, especially as the remnants of the Hebrew newspaper burned with pictures of the “religious” Jews found when scorched tree, and it seems to have been used during the tree lighting the fire, also appear to have been put out the fire firefighter by a car, because there are signs of that. ”

In the same context has revealed delegation of the “Aqsa Foundation” was also destroyed about fifteen witnesses or parts of the graves in different parts of the cemetery, and asserted that it is clear that this destruction of evidence of a new addition to dozens of other graves that have been broken before, and it was detected in Russian writing slogans on some of the graves, did not know its meaning.

In turn, denounced the Haj Sami Rizkallah – a one Metwally stop the cemetery of God – these crimes and said: “This attack is ugly on the sanctity of cemetery of God, which is regrettably not the first, and it seems he is not the last, because the Israeli establishment really does not prosecute those who commit such these crimes, and therefore, the Israeli establishment is the official with responsibility for these crimes, the successive and repeated against the holy sites and endowments, and we have come today to the presence of fever is contagious and dangerous by the authorities Israeli attacks on our mosques and Mkabrna, and has reached enough is enough. ”

In turn, informed the “Aqsa Foundation” Engineer Mustafa Abu Zahra – one Metwally stop the cemetery is the Chairman of the Committee of Muslim graves in Jerusalem – for this crime, was condemned Alhaji Abu Zahra strongly to this crime, and said: “It is time to stop series of attacks that the cemetery God and the other tombs and mosques.” 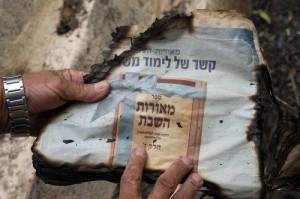 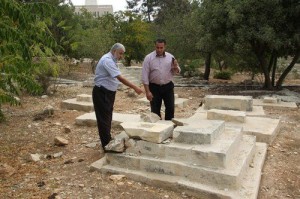 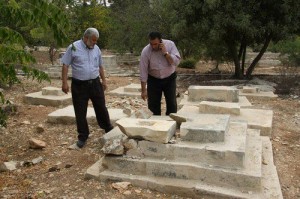 Syrian President Bashar al-Assad still enjoys a wide base of support among Syrians and this rally in the Syrian Capital was a huge boost. His supporters say he needed in the ongoing standoff with street protests in Homs and Hama.

The Rallies kicked off early Wednesday and drew thousands of people to the Seba Bherat square in the heart of Damascus. By noon, aerial view of the rally showed an impressive human tide chanting their loyalty to Assad and waving Syrian flags.

The Pro-Assad rally came weeks after mounting international pressure on the embattled Syrian president and a failed US-backed resolution against Syria at the UN.

The March was called for by local NGO’s and Syrian on line Media groups. Assad supporters carried posters thanking Russia and China for opposing their veto to the American-led campaign against their country and they dismissed claims by the opposition that the march was entirely orchestrated by the Government

Support for President Assad remains strong in Syria’s two largest cities, Damascus and Aleppo where he enjoys the backing of Syrian minority groups, middle income families and the business elite.

The Syrian President has previously promised many reforms of the constitution, the Media and the electoral system. His government has just announced it will appoint a special committee to draw up a new constitution in the next days.

This is the fourth rally in support of the Syrian President Bashar Al-Assad. Most of the people we spoke with here in Damascus say it an indication of the reservoir of support he can still draw on among the public.

Security sources told WAFA that Israeli forces raided villages and towns of; Yabad,
Arraba, Kafreet, Kafrai, Fahma, Jaba, Aja, Qabatya and Maythalon, and patrolled their military vehicles in alleys and streets of these towns and villages in provocative steps. No arrests reported.

Prime Minister Salam Fayyad, who participated in the outdoor activity with other government officials, has launched the start of the olives season in Faroun.

Fayyad had invited government employees, foreign diplomats and international bodies operating in the Occupied Palestinian Territory to participate in the usually festive activity.

The participation of EUPOL COPPS and that of the Palestinian Civil Police strengthen the concept of community policing and ensuring the safety and security of Palestinian
farmers.

To be noted, Olives are a main source of income for many Palestinians living the countryside of the West Bank.
(english.wafa.ps / 13.10.2011)

CAIRO, Oct 13 (KUNA) — The Arab League Council urged Thursday for an immediate
and unconditional release of all Arab prisoners at the Israeli jails, welcoming the prisoner swap deal reached two days ago by Hamas and Israel.
The Council meeting, held here at the permanent delegate-level under the chairmanship of Qatar with the League’s Secretary General Nabil Al-Arabi attending, lauded the efforts made by the Palestinian negotiators and the Egyptian mediators to secure the agreement on the release of the Israeli soldier Gilad Shalit in exchange for
more than a thousand Palestinian prisoners.
The Council tasked the delegates of the Arab group of states to the United Nations to table a request for the General Assembly to seek an legal advice from The Hague-based International Court of Justice on the status of the Palestinian and other Arab prisoners at Israeli jails.
The request aims to designate the prisoners as prisoners of war who have the legitimate right to resist the (Israeli) occupation authorities as per the provisions of the relevant international laws.
The Council paid tribute to, and renewed solidarity with the Palestinian prisoners who started a hunger strike more than a fortnight ago. It condemned the repressive measures and human right violations being committed by the Israeli occupation authorities against the Palestinian detainees in a bid to break the latter’s will.
The Council decided to convene an international conference at the League’s
headquarters here in early 2012 to explain the ordeal of the Arab prisoners in line with a relevant resolution adopted by the Arab Summit in Sirte, Libya, in 2010.

PVV parliamentarian Sietse Fritsma suggested to Minister Gerd Leers (Immigration
and asylum) that if Morocco continues to refuse to accept illegal Moroccans
deported from the Netherlands, the Netherlands should not let Moroccan ships and
planes into the country.

The problem with deporting rejected asylum seekers is that their country of origin often refuses to cooperate in their return. Asylum seekers without a passport need new travel papers.

The opposition factions are not taking Fritsma’s idea very seriously. Leers didn’t want to speak about measures against uncooperative countries, but he did say that refusal could have consequences for eventual development cooperation.

Leers did respond favorably to Fritsma’s proposal that a refugee will be forced to sign a document on his arrival stating his country of origin and where he’s going if his asylum request will be rejected.

A commission of the Chamber of Representatives has decided to tighten up rules regarding the care and support that must be given to asylum seekers in Belgium.
In future asylum seekers will only receive benefits in kind and no cash and from
citizens of other EU countries it will become increasingly difficult to secure the ‘living wage’ benefit from local social services.

In  the new Belgian Government one single minister will be responsible for Asylum
and Migration policy. Fresh legislation is currently going through parliament that will provide the new minister with a powerful instrument with which to limit the influx of asylum seekers in Belgium.

A Syrian army unit entered Lebanon on Wednesday and headed towards the Wadi Anjar region in the Bekaa where it set up base past the sand barrier which the Lebanese army had set up years ago to mark the borders, reported Voice of Lebanon radio.

The coordination and cooperation office between the two armies began their contacts to tackle the matter, with the army command demanding that the Syrian troops withdraw from Lebanon.

VDL also reported that Internal Security Forces Intelligence Bureau Bekaa branch managed to arrest two individuals, a Lebanese and a Syrian, accusing them of purchasing light and medium arms and smuggling them to Syria.

The Syrian national confessed that he came to the Bekaa to purchase weapons from Lebanese arms dealers, adding that he was seeking to buy RPGs and machineguns to transport them to Syria.

Investigations are underway with them.