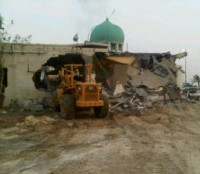 West Bank, (Pal Telegraph)-Israeli occupation forces early Tuesday demolished a mosque for the third time in the area of Khirbet Irza in Wadi El-Maleh, north of the Jordan Valley.

He pointed out that Israeli authorities issued a demolition order to the mosque for the third time under the pretext of being built in a prohibited area.

It is noteworthy that Israel used to demolish Muslims’ mosques in the occupied West Bank as part of its unfair plan that aims to annex the area to its settlements.