But the rituals of death cannot wipe away the horrific injuries that have mutilated his body almost beyond recognition.

Nor do they blot out that Hamza – riddled with bullets, kneecapped and with neck broken and penis hacked off – has the rounded cheeks and gentle face of a child. 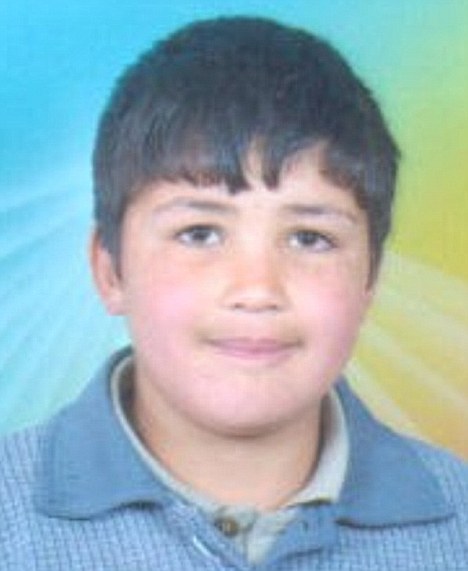 At 13, he is one of the youngest known victims of Syria’s ruthless crackdown on protesters who have tried to overthrow the government of  President Bashar al-Assad.

The teenager’s family were told not to speak of his terrible fate. But in a pitiful act of defiance, they posted the footage of his corpse online.

The action led to his father being arrested last week. His whereabouts are unknown.

Posted on YouTube, the video is accompanied by a chilling commentary which details the worst of Hamza’s dreadful wounds.

An unseen attendant tenderly shifts the scarred limbs and head so that the viewer can see each injury, including two bullets which were fired through each arm and then entered his chest.

‘In addition there is worse. They did not satisfy themselves with all the torturing so they cut off his genitals.’

At this point, the video is censored as the wounds are too horrific to show. 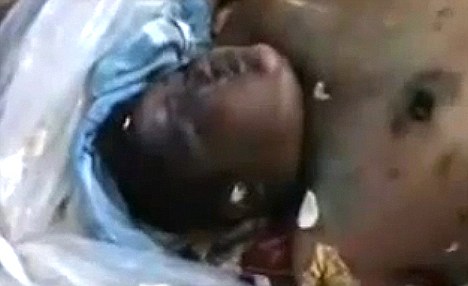 Brutal: In this still from the film made by his family, bullet wounds, burns and bruising can be seen on Hamza’s body 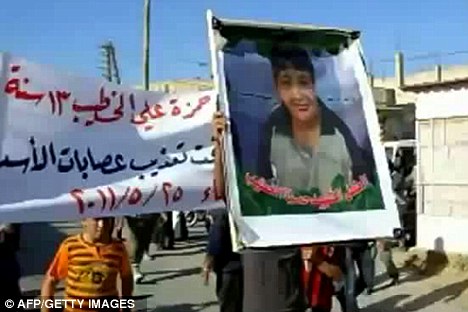 Hero of the revolution: Hamza’s death has prompted a renewed surge of support for the rebellion

Hamza was picked up by security forces at a protest in Jiza, a village in the rebel province of Dar’a in Syria on April 29.

For an agonising month, his desperate family waited for him to go home, terrified of what had become of him.

And when his broken body was finally returned, the injuries which disfigured almost every part of his flesh told the horrific story that he could not.

Amid the mass of cigarette burns, the bullet wounds and bruises, it is impossible to know what finally killed him.

But it is perhaps unsuprising that Hamza, with his childish features and innocent smile, has become the most potent symbol of Syria’s uprising.

Thousands of protesters took to the country’s bloodied streets this weekend chanting his name.

Children demonstrated in Damascas while people clambered on the roofs in Aleppo to mark the ‘Day of Hamza’.

In the city of Hama, 116 miles from the capital, a huge crowd occupied the central square clutching copes of his photographs in their hands. 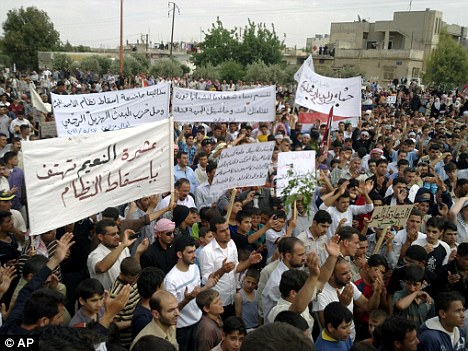 The protests go on: Hundreds take to the streets in a day of rage in Talbiseh, in the central province of Homs 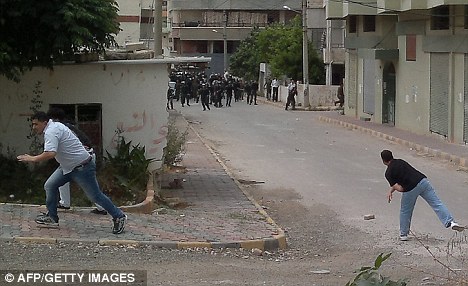 Storm force: This image shows protesters hurling stones at dozens of soldiers in Banias, on the Mediterranean coast

The video footage of his mutilated body posted online – and broadcast on Al Jazeera – has further fuelled the anger of Syria’s protesters.

Facebook group ‘We are all Hamza Ali al-Khateeb, the Child Martyr’ has attracted 58,000 people while the English version has 3,000 members.

Radwan Ziadeh, an exiled human rights activist told the Washington Post the boy had already become a symbol of the Syrian revolution.

‘(His death) is the sign of the sadism of the Assad regime and its security forces,’ he said.

‘Torture is usual in Syria. It’s not something new or strange. What is special about Hamza is that he was only 13 years old. He really is a child.’

The Syrian uprisnig against President Bashar al-Assad is now entering its seventh week.

Foreign journalists are banned from entering the country and the rebellion has been conducted amid a media blackout.

But stories of the brutality of Assad’s troops have still trickled out indicating that protests have been ruthlessly suppressed.