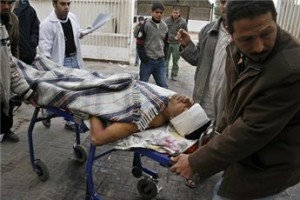 Medical staff spokesman, Adham Abu Silmya, told the Maan News Agency that the wounded residents were transferred to some hospitals north of the Gaza Strip; one of the injuries was described as a critical condition.

The Israeli military spokeswoman admitted that an Israeli air strike targeted a group of Palestinians north of the Gaza Strip, claiming that the group was intending to fire rockets towards Israeli cities near the Gaza Strip.

However, the Palestinian factions did not claim any responsibility for intention to launch missiles towards Israeli inhabitants near Gaza.