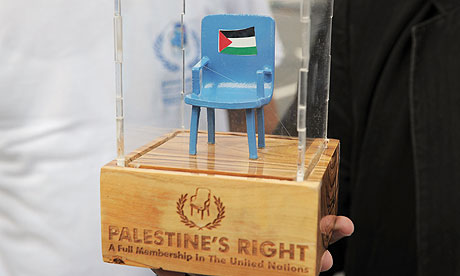 A member of the Palestinian delgation holds a symbolic seat outside the United Nations HQ in New York.

US and European negotiators have urged Israel to refrain from taking punitive measures against Palestinians if they press ahead with their attempt to win recognition of their state at the United Nations.

The Israeli government is considering a range of retaliatory steps, including withholding customs revenues it collects on behalf of the Palestinian Authority (PA) under the Oslo accords. Around 400m shekels (£69m) is forwarded to the PA each month.

Some Israeli ministers, including the extreme rightwing foreign minister, Avigdor Lieberman, and the finance minister, Yuval Steinitz, are calling for the money to be withheld. But US and EU diplomats fear this could seriously destabilise the PA and even cause its collapse.

Dan Meridor, the deputy prime minister, who is believed to oppose such a move, said on Monday  that no decisions had been taken by the Israeli cabinet. “I try not to use the language of threats,” he told a conference in Jerusalem.

Co-operation between the PA and Israel on security and economic issues “has been helpful to both sides”, he added. Any decisions would “need to take into account Israeli interests”. If the PA collapsed, Israel would be forced to take responsibility for the Palestinian territories, which it is reluctant to do.

Nabil Shaath, a senior member of the Palestinian team in New York, said at the weekend that the PA was not unduly concerned about Israeli threats to withhold customs revenues.

The US Congress has also threatened to halt American funding of the PA if the UN move goes ahead. “You don’t barter your rights for money,” said Shaath. He said Arab states had given the PA assurances that they would make up any shortfall, and the Europeans and Japanese had also pledged not to cut funds.

Other punitive measures proposed by Israeli ministers include annexing the West Bank settlements and tearing up the Oslo accords, under which the PA was given control of parts of the West Bank and Gaza.

Negotiations to find a way to avoid a diplomatic collision at the UN continued in New York. A meeting of the Middle East quartet – the US, EU, UN and Russia – was due to resume on Monday after failing to agree on the wording of a statement.

Quartet envoy Tony Blair said on Sunday that a showdown could still be averted. “The question is, can people find a way that enables the Palestinians to take a significant step forward to statehood at the same time as not ending up in a situation where the UN replaces negotiations?”

Palestinian president Mahmoud Abbas yesterday told the UN secretary-general Ban Ki-moon he would seek full membership for a Palestinian state at the United Nations. Ban told Abbas he would send any application submitted to the Security Council and called for the Israelis and the Palestinians to resume talks “within a legitimate and balanced framework,” UN spokesman Martin Nesirky said.

Israeli prime minister Benjamin Netanyahu called for Abbas to meet him in New York. The Israel leader said he wanted to resume peace talks, upping the pressure on Abbas and building on the frenzied diplomacy swirling around the Palestinians bid.

He told ABC television that it was important that a quartet statement provided “some sense of a timeframe, a timeline, if you like, for a successful negotiation”. Blair is thought to be pushing for “benchmarked” talks, by which identified key issues would need to be agreed by defined dates.

Another proposal reportedly being floated is that the Palestinians submit their application for full membership of the UN as an independent state, but it is then “frozen” for a defined period, perhaps six months, during which bilateral talks resume in an attempt to reach a negotiated settlement to the conflict.

A poll conducted for the BBC found that  an average of 49% of people in 19 countries supported the recognition of a Palestinian state, with 21% against. In the US, which has pledged to veto a proposal put before the security council, 45% backed the proposal and 36% were against. In the UK, 53% were in favour and 26% opposed. Support was highest in Muslim countries.