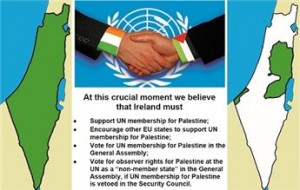 representatives are among 150 signatories to a statement calling on the Irish government to support Palestine’s bid for full UN membership.

“The Palestinian leadership wants a negotiated two-state solution. But Israel refuses to negotiate,” the statement notes, urging the Irish government to encourage other European nations to support Palestine’s membership of the UN.

“The Palestinian population, 60 percent of whom are under 25, are demanding their democratic rights not to live under Israeli military occupation,” the statement adds.

The advertisement was organized by Sadaka – the Ireland Palestine Alliance, and paid for by signatories.

Sadaka chair Marie Crawley said it sent “a powerful message of the will of the Irish people to its government.”

“Ireland has a long proud history of support for the people of Palestine.  There is an undeniable connection and warmth between our two peoples and to date that has been reflected in Irish government support for the Palestinian position in international fora.  It would be a travesty if that policy stance was to change.”

She added that it would be “shameful to the people of Ireland” if the government failed to support Palestine in a vote at the UN General Assembly.

“The creation of a Palestinian state is long overdue and it is time the international community spoke with a strong collective voice to Israel and the United States.  Ireland must be one of those voices.”

Ireland upgraded Palestinian representation to a full diplomatic mission headed by a Palestinian ambassador in January.