Palestinian youth have marched today to knock on the doors of Jerusalem. They marched to knock down the apartheid on their land. And under the title of “Olive Revolution” it was. Palestinians denied entry to Jerusalem held their Friday prayers in front of the military checkpoints.

In the morning, the presence of the PA security forces was exceptional. They were not present to protect the Palestinians from an Israeli attack. They were present to collaborate with the Israeli soldiers who were denying Palestinians the right to pray in Jerusalem on the last Friday of Ramadan. The image of a two Palestinians wearing their formal kaki uniform standing inches in
front of the Israeli army, checking Palestinians IDs was very hurting.
The Palestinians denied from entering to Jerusalem held their prayers in front of the fully armed soldiers. After finishing their prayers, they stood up high chanting and screaming out loud. That loud voice that the Israeli brutality has failed to shut down.
Despite the few numbers of youth and activists present, it was a very hopeful scene. The demonstration gathered Palestinians from the West Bank, Jerusalem and the Palestinian lands occupied in 1948. It gathered them all standing and screaming out loud, we’re ONE PEOPLE. We fight for ONE CAUSE. Nothing will split us anymore.
The numbers of protesters were much lower than their numbers in the June 5th and May 15th marches, but the numbers actually standing face to face with the soldiers were higher. About 100 to 150 protesters were standing in the front line compared to the dozens in June 5th and May 15th. 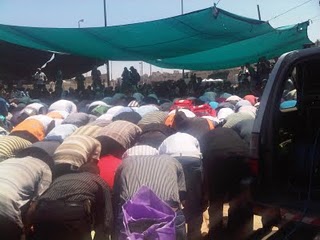 The Palestinian tweeps were all present. They were all very courageous. They were not satisfied with their cyber presence. They went down to the street at the time others preferred to remain locked up in their rooms re-tweeting them. There are two kind of people, one that make history, other that follow it.
The youth who were standing there were the regulars in the popular resistance. The youth that keep coming week after week. Is it an addiction to the toxic gas? Maybe. But for sure they have an addiction to the act of freedom.
These young ladies whom I heard chanting in March 15, they’re the same courageous ladies chanting weekly in Nabi Saleh, and again they’re still the same ones who screamed the hell out of their vocal cords today. And week after week they bring more hope to me. These are the core of the revolution.

A courageous young lady screamed at the soldiers before we head home: “We don’t fear you, and we will keep on coming.” We certainly will. And the Olive Revolution will keep on going. Despite the enemies we’ll come. Despite the attempts to frustrate us, we’ll keep on coming. The revolution is not a must, it’s a choice. We already made our choice. Alone or with the masses, we’ll keep on marching towards our rights. If we don’t succeed we at least have the honor of the attempt.