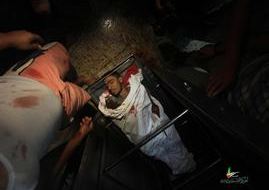 The sources stated that resident Hisham Adnan Abu Harb, and another unidentified resident, were killed when the army bombarded a tunnel in Rafah, in the southern part of the Gaza Strip; three residents went missing.

Also, resident Salama Al Masry was killed, while 20 residents, including 7 children and 4 women, were injured when the army bombarded a sports center in Beit Lahia, in the northern part of the Gaza Strip; some of the wounded are in critical conditions.

The sports center was crowded as a sports event was being held when the army bombarded it; medical teams are searching among the rubble to trying to locate and save additional potential casualties.

On Wednesday at night, the Israeli Air Force assassinated a fighter of the Al Quds Brigades, of the Islamic Jihad, in Sheikh Radwan neighborhood, in central Gaza. The fighter was identified as Atiyya Maqat.

On Wednesday evening, medics located the remains of a 65-year-old resident, under the rubble of a shelled building east of the Al Boreij refugee camp, in central Gaza. Medical sources reported that the body of Ismail Amom, 65, was severely mutilated.

Meanwhile, the Al Quds Brigades claimed responsibility for firing five Grad missiles into Asqalan (Ashkelon) and Eshkol. The Brigades said the shelling come in retaliation to the ongoing Israeli escalation and the assassinated of its fighters.

Israel sources reported that two Grad missiles were fired on Wednesday evening into southern Asqalan and near Ofakim; Israel claimed the shells landed in open areas.

Several shells were also fired at areas in the Eshkol Regional Council in the Negev. No injuries were reported while residents of Shear Hanegev and Eshkol were asked to head to the shelters.

On Sunday, and after Palestinian factions declared truce, Israel killed three Palestinians in Gaza and wounded four others.

Palestinian medical sources in the Gaza Strip reported that a total of eighteen Palestinians, including children, were killed and dozens were injured, in ongoing Israeli attacks since last Thursday.