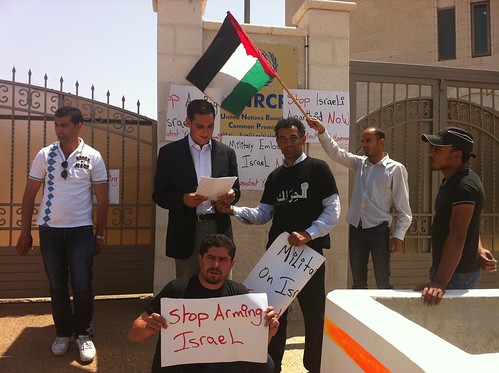 The launch of the call for a military embargo against Israel in Ramallah, 8 July 2011.

The Palestinian Boycott, Divestment and Sanctions Committee (BNC) announced today a call for an urgent military embargo against Israel, “similar to that imposed against apartheid South Africa in the past.”

The call was symbolically delivered by youth in Ramallah to the United Nations office there. The call is also supported by Nobel Peace Prize winners such as Archbishop Desmond Tutu, Mairead Maguire, Betty Williams and Adolfo Perez and is supported by Alternative Nobel Prize winners Walden Bello and Chico Whitaker and journalist Naomi Klein, as well as the South African trade union COSATU and the Brazilian trade union confederation CUT, according to the below press release.

The full text of the call can be found here. The BNC stated in a press release circulated today:

“A comprehensive military embargo on Israel is long overdue. It forms a crucial step towards ending Israel’s unlawful and criminal use of force against the Palestinian people and other peoples and states in the region, and it constitutes an effective, non-violent measure to pressure Israel to comply with its obligations under international law,” reads the BNC’s call.

The call comes amidst mounting pressure to hold Israel accountable to international law, including from the Freedom Flotilla 2 and the Welcome to Palestine “Fly-in” which began arriving at Tel-Aviv airport this morning amidst chaotic scenes despite many activists being prevented from flying from Western airports.

Palestinian activists with the Hirak Shababi youth movement gathered in front of the United Nations office in Ramallah to symbolically deliver the call along with evidence of international military collusion with Israel.

Youth activist Aghsan said: “We face Israeli repression and violence on a daily basis. Our generation has grown up under occupation and seeing friends and relatives killed, injured or imprisoned. We demand that the international community stops funding and profiting from the military and security apparatus that sustains the colonial Israeli apartheid regime. All trade and cooperation must stop. Young Palestinians demand a comprehensive military embargo now.”

“I endorse this call for an arms embargo because we desire peace and justice for Palestinians and Israelis through non-violent ways,” said Archbishop Tutu.

Trade union confederations such as the South African COSATU and the Brazilian CUT, have announced their support for the campaign.

A spokesperson for COSATU said: “States and inter-state organizations, such as the United Nations, have a legal obligation to ensure that Israel complies with international law, but they have failed to do so. Impunity emboldens Israel while its international military trade relations bankroll and entrench its continued violence, militarism and expansionism.”

Civil society groups from more than a dozen countries are set to announce their support for the campaign and the actions they intend to take over the course of the launch.

The European Network Against the Arms Trade will announce its support of the military embargo call on Monday.

The BNC has today published a detailed legal and political analysis of international military relations with Israel and their impact [download the PDF].

The US Campaign to End the Israeli Occupation also announced today its contribution to this global initiative — the launch of its latest website www.fundcommunityneeds.org, “as part of its ongoing campaign to end more than $3 billion per year of US military aid to Israel.”

The US Campaign stated in an email to supporters:

The website provides activists with ideas, resources, and inspiration for running effective, long-term campaigns to pass city council resolutions calling on the federal government to end U.S. military aid to Israel and redirect that money to unmet needs here at home.

“At a time when cities across the country are struggling with budget deficits, it is more important than ever for people in the United States to reexamine the financial and moral problems posed by providing Israel $30 billion in weapons from 2009 to 2018. These U.S. weapons are misused by Israel to commit human rights abuses of Palestinians, making us complicit in Israel’s illegal 44-year military occupation of the Palestinian West Bank, East Jerusalem and Gaza Strip. We should be spending money building affordable housing, rather than paying for Israel to misuse Caterpillar bulldozers to demolish Palestinian homes.”

The new website joins others in a series designed to educate people in the United States about the financial and moral costs of providing Israel with weapons:

The website www.aidtoisrael.org highlights the community costs of providing $30 billion in taxpayer-funded weapons to Israel from 2009 to 2018 and the budgetary trade-offs involved.

The website www.weaponstoisrael.org documents in detail the more than 670 million weapons given to Israel by the United States from 2000 to 2009 and the devastating impact these weapons have on Palestinian civilians.