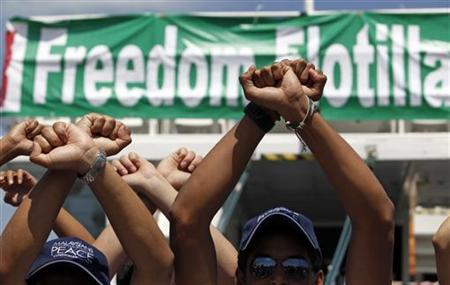 Pro-Palestinian activists hoping to sail to Gaza this week fully expected their flotilla to be blocked by Israeli marines. Instead, to their shock, the mission was holed even before they put to sea — by Greece.

The diplomatic maneuvering that snarled the Gaza initiative pales in comparison with the behind-the-scenes tussles surrounding a unilateral drive by the Palestinians to secure United Nations’ recognition of statehood this September.

While Israel has won this first round, the stakes will be much higher in the months ahead, with the possibility of chaos in the Palestinian Territories if politicians mess it up.

“Gaza is just a prologue to a series of events that we will see heading into September,” said Yoram Meital, a Middle East expert and professor at the Ben-Gurion University of the Negev.

“If we cannot find a way for a resumption of serious peace negotiations then we will face a completely different environment and a very risky context.”

Israel received widespread criticism last year when its commandos boarded the first flotilla heading to Gaza, which is run by Islamist group Hamas, killing nine Turkish activists in clashes on the deck.

In a effort to shore up waning support, Israel subsequently went on a charm offensive, reaching out to Turkey’s historic foe Greece and proposing a series of military and business tie-ups.

Not previously seen as pro-Israeli, Athens welcomed the overture and the friendship has paid dividends for Israel, with Greek authorities pouncing on flotilla ships preparing to leave its ports this past week and keeping them in harbour.

“I would never have believed that to pursue my convictions and freedom I would have had to clash with a European democracy like Greece,” said Alain Connan, the captain of a French ship which is stuck in Greek waters and still looking for a way out.

On the face of it, the flotilla debacle does not bode well for the Palestinians, demonstrating Israel’s ability to galvanize foreign governments despite misgivings about its tough attitude toward peace talks.

However, Israel might find it easier to build consensus for its sea blockade of Gaza, meant to stop weapons reaching Hamas, than it will to prevent the Palestinians driving ahead with their U.N. initiative.

“As far as the flotilla was concerned, almost everyone was very uneasy because it was not clear if it complied with international law,” said Oded Eran, head of Tel Aviv University’s Institute for National Security Studies.

“If the Palestinians do decide to go to the United Nations, then they will probably get around 150 votes (out of 192 U.N. members) so the resolution will pass. The real issue is who abstains or votes against.”

Much as he reached out to Greece, Israeli Prime Minister Benjamin Netanyahu has embarked on a tour of other European countries, to convince them to put pressure on the Palestinians to shun the U.N. and return to the negotiating table.

Wednesday he travels to Romania, with Bulgaria on the schedule for Thursday.

“Our aim is to build a moral minority and get the countries that count, the Western democracies, to vote against the Palestinians and draw the teeth out of this thing,” said one senior Israeli official, who declined to be named.

The failure of the aid flotilla has barely caused a ripple among Palestinians — including Gazans, most of whom would agree that there is no humanitarian crisis in progress.

But the U.N. project is being followed much more closely.

The United States and European Union are trying to head off a showdown in New York by reviving the direct peace talks that collapsed last year amid a row over Jewish settlement-building in the West Bank, where Palestinians hope to create their state.

This looks a forlorn hope, with the two sides as far apart as ever and the Palestinian leadership apparently hopeful that a convincing vote in the U.N. General Assembly might finally give some external momentum to their long-stalled independence drive.

Washington looks certain to veto any statehood resolution put before the U.N. Security Council, which means Palestinians will not be able to secure United Nations membership, for now.

But Israelis fear that strong support in the general assembly, which includes all U.N. members, might encourage the Palestinians to rebel and demand sovereignty.

Uprisings across the Arab world have failed to inspire the Palestinians to take to the streets once more and fight for change, but judging by countless campaigns for a third intifada on social media, it may only be a question of time.

“Palestine is a fuse that could still explode in the region,” said George Giacaman, co-founder and general director of the Palestinian Institute for the Study of Democracy.

“Remember, this is a conflict that has lasted for 120 years and it is not going to be ended in just one round,” he added, referring to the disabled Gaza flotilla.