Despite setbacks, sail organizers refuse to give up. ‘We are determined to reach Gaza one way or the other – This ain’t over,’ says passenger. Meanwhile, Foreign Ministry denies accusations that Israel sabotaged boats, calling them ‘ridiculous, paranoid’

Despite the mysterious sabotage, and Greece’s announcement that it will not allow ships to sail to the Gaza Strip from its ports, the flotilla activists are as determined as ever to break the naval blockade.

“We won’t stay here,” Dror Feiler, who plans to sail to the Palestinian enclave onboard the “Juliano” vessel that is docking in Greece, told Ynet on Saturday.

“We are determined to get to Gaza one way or the other. This ship is called the Audacity of Hope – this ain’t over yet,” added Free Gaza activist Greta Berlin.

On Friday, the “Audacity of Hope” set sail from the port in Greece en-route to Gaza, but was stopped shortly after by the Greek Coast Guard and diverted to a military dockyard.

Left-wing activist Yonatan Shapira, one of the ship’s crewmembers, told Ynet that while local authorities claim the ship was not fit to sail, “the Greek government has bigger bosses that were pressuring it. 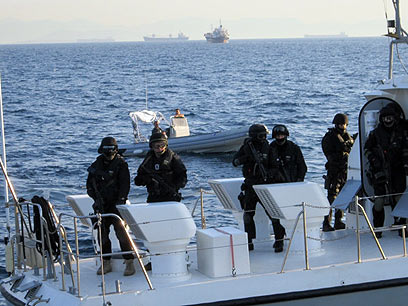 “I heard that someone called the Greek Embassy in the United States to protest the halting of the ship and was told by embassy employees that the Americans instructed them to do it,” said Shapira.

The Greek authorities on Friday announced that “the departure of ships carrying Greek and foreign flags from ports in Greece to the waters surrounding Gaza has been banned.”

Hamas has denounced the decision, saying it was in contradiction with international law and customs, and urging the European Union to step in.

“We will do whatever we can to leave,” said Shapira, “I know everyone here are yearning for it to happen.” 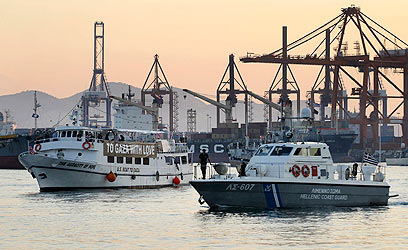 Commenting on the taking over of the ship, Shapira said, “Commando soldiers wearing masks and armed with automatic weapons encircled us on Coast Guard ships, aimed their weapons at us and told us it was for our own safety.

“It was one big farce,” he noted, adding that the activists continued to dance, play and talk to the commandos through the megaphone.

“I told them to think about the fact that the majority, if not the entire Greek nation supports us and wants us to sail to Gaza,” he said.

‘Greece sold its soul to Israel, US’

Meanwhile, Feiler said that repair work has been completed on the “Juliano” vessel, which according to the flotilla organizers was sabotaged by Israel.

“Today we’ll put it back in the water and continue our preparations,” he said, adding that he is not scared of clashing with the Greek army.

“I’m not afraid of the Israeli commando, so why would I be scared about the Greek commando? If they want to stop us, they can. We don’t have the capabilities of a state, we are not an army,” he added.

“Greece sold its body to the banks and its soul to Israel and the United States,” Feiler noted angrily, “I don’t think – I know that Israel and US pressure caused this.”

Feiler called on the government of Israel to allow the flotilla activists to reach Gaza. “We aren’t carrying any dangerous items,” he stressed. “Removing the blockade will help Israel stop the radicalization of the Palestinians and release the pressure cooker that is called the Gaza Strip,” he said.

On Saturday, Foreign Ministry Spokesperson Yigal Palmor denied claims according to which Israel sabotaged two of the Gaza-bound flotilla ships slated to sail from Turkey and Greece.

“These are ridiculous, paranoid accusations. The organizers didn’t do the minimum required in order to prove that there was indeed sabotage; they didn’t even file a complaint with the police. They live in a James Bond movie,” Palmor noted.