After many Palestinian refugees were killed or injured in the most recent Nakba Day protests, the events have forced a discussion of the period during which Palestine was depopulated of the majority of its native inhabitants. I recently wrote abouthow the mainstream media is doing a great disservice by distorting a historical narrative they had previously reported on. But despite this, in an era where the internet allows for rapid fact-checking and access to diverse information, the discussion about the Palestinian Nakba continues.

Yesterday, PLO Chairman Mahmoud Abbas published an Op-Ed in the New York Times where he discussed his personal experience as a refugee. The Israeli Prime Minister Benjamin Netanyahu responded to Abbas’ piece with the token Zionist response to any Palestinian claims on the events of 1948. Netanyahu “emphasized the Palestinians’ rejection of the UN’s partition plan in 1947, while the Jews were willing to accept it.”
“Don’t you see,” says the Zionist narrative, “they don’t want a state. They want everything. We were ready to make a deal but they rejected it. All they do is reject, reject, reject, and that is all you need to know about the Arabs, so you can stop thinking now.”
But wait a minute. What was this partition plan and why did the Palestinians reject it?
Throughout history, there have been various attempts at plans to divide the land. A U.S. fact-finding commission as early as 1919 was particularly prescient about what the creation of a Jewish state in Palestine meant. They were well aware that the trajectory of Zionism and the promises of the Balfour declaration would create havoc (emphasis here and elsewhere is mine):

[We] recognized also that definite encouragement had been given to the Zionists by the Allies in Mr. Balfour’s often quoted statement in its approval by other representatives of the Allies. If, however, the strict terms of the Balfour Statement are adhered to — favoring “the establishment in Palestine of a national home for the Jewish people,” “it being clearly understood that nothing shall be done which may prejudice the civil and religious rights existing in non-Jewish communities in Palestine”– it can hardly be doubted that the extreme Zionist Program must be greatly modified.

For “a national home for the Jewish people” is not equivalent to making Palestine into a Jewish State; nor can the erection of such a Jewish State be accomplished without the gravest trespass upon the “civil and religious rights of existing non-Jewish communities in Palestine.” The fact came out repeatedly in the Commission’s conference with Jewish representatives, that the Zionists looked forward to a practically complete dispossession of the present non-Jewish inhabitants of Palestine…

But partition attempts followed nonetheless; the report of Peel Commission of 1937 realized that there was a pretty significant demographic problem in dividing the land into two states:

The political aspect of the land problem is still more important. Owing to the fact that there has been no census since 1931 it is impossible to calculate with any precision the distribution of population between the Arab and Jewish areas; but, according to an approximate estimate, in the area allocated to the Jewish State (excluding the urban districts to be retained for a period under Mandatory Administration) there are now about 225,000 Arabs. In the area allocated to the Arab State there are only about 1,250 Jews; but there are about 125,000 Jews as against 85,000 Arabs in Jerusalem and Haifa. The existence of these minorities clearly constitutes the most serious hindrance to the smooth and successful operation of Partition. If the settlement is to be clean and final, the question must be boldly faced and firmly dealt with. It calls for the highest statesmanship on the part of all concerned.

The answer to the question which required the “highest statesmanship” facing it boldly? Ethnic cleansing:

If Partition is to be effective in promoting a final settlement it must mean more than drawing a frontier and establishing two States. Sooner or later there should be a transfer of land and, as far as possible, an exchange of population.

David Ben Gurion’s thoughts on the compulsory transfer of the Arabs are noted in his diary: “The compulsory transfer of the Arabs from the valleys of the proposed Jewish state could give us something we never had, even when we stood on our own during the days of the first and second temple — a real Jewish state.” While Ben Gurion noted hesitation to transfer in his diary as well, he ultimately concluded “We must uproot from our hearts the assumption that the thing is not possible. It can be done and we must prepare to carry it out.” The quotes and more on Ben Gurion’s thinking at the time can be found here.
The Peel Commission realized that to appease Zionist aims (majoritarian Jewish state in Palestine) in a “clean and final” solution, there would have to be disproportionate ethnic cleansing of Palestinian Arabs from their native towns and villages. Not surprisingly, the Palestinian Arabs rejected this plan as any people would reject a plan that called for their own ethnic cleansing.
So in a final attempt at a partition plan, the UN General Assembly endorsed a plan that attempted yet again circumvent the demographic complexities that the Peel Commission report suggested be handled with ethnic cleansing. Needless to say, it failed to do so. 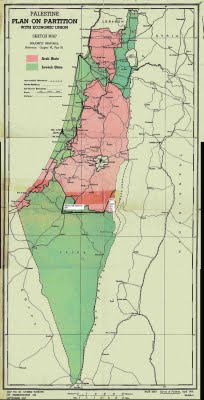 The map to the right shows the proposed partition of Palestine in 1947. The total population of the land at the time was approximately 2 million people of which 600,000 were Jews and the remainder were Palestinian Arabs. The partition plan, however, sought to give 55% of the territory to 30% of the population. Even within the territory allotted to the Jewish state — the area in green in the partition map — nearly half the inhabitants were Palestinian Arabs. This means that if such a plan was implemented, not only would a minority receive a majority of the land, but half the residents of the newly created Jewish state would either be transferred or disenfranchised from their right to self-determination.
When you look at the specifics of the partition, two very clear and important facts emerge: 1) No one in their right mind, putting themselves in the shoes of the Palestinians, would have accepted that deal, and 2) it is highly unlikely that the two intertwining “sausage-link”-shaped states proposed by this plan would have been conflict free.
Take a close look at this map and the borders. Have you ever seen anything like it anywhere else in the world? You probably haven’t because such partitions do not work. And it wasn’t simply demographic concerns that were at play here. The northern “sausage link” border was drawn to ensure that the railroad that went from Haifa to Beisan would remain completely under the control of the Jewish state. Ultimately, the vast majority of Palestinian villages along this route were depopulated and destroyed in the operations that David Ben Gurion made sure the pre-state government of Israel prepared for a decade earlier.
While the Zionist narrative might claim that the acceptance of this plan by Jews at the time and its rejection by the Palestinian Arabs shows Jews were willing to compromise and Arabs were not, in reality the Jews accepted the plan because they had everything to gain and the Arabs rejected it because they had everything to lose.
So it’s rather disingenuous then, for Netanyahu or others like him who repeat the Zionist talking points on this partition plan, to attempt to justify Palestinian dispossession because Palestinians justifiably rejected their own dispossession.
(blog.thejerusalemfund.org / 21.06.2011)