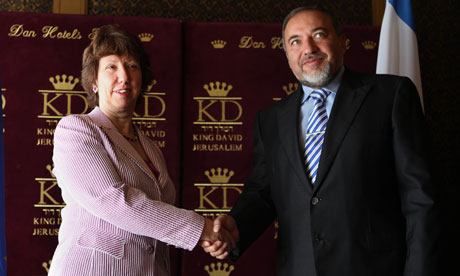 Catherine Ashton and Avigdor Lieberman prior to their meeting in Jerusalem.

Israel will renounce past agreements made with the Palestinians if they press ahead with unilateral plans to seek recognition of a Palestinian state at the UN, foreign minister Avigdor Lieberman has said.

“A move like that will be a violation of all the agreements that were signed until today,” Lieberman told the EU foreign policy chief, Catherine Ashton, in Jerusalem. “Israel will no longer be committed to the agreements signed with the Palestinians in the past 18 years.”

The principal agreement referred to is the Oslo accords, signed in September 1993, under which the Palestinian Authority (PA) was created with responsibility for administering parts of the West Bank and Gaza.

Lieberman’s comments further raise the stakes in the run up to the UN general assembly in September, at which a majority of the 192 countries are expected to back a Palestinian state. Israel and the US are fiercely opposed to such a move and pressure is being applied to the Palestinians to abandon their approach.

Ashton is visiting Jerusalem and the West Bank in an attempt to break the impasse in negotiations between the two sides. Talks collapsed last September after Israel refused to extend a temporary and partial freeze on settlement construction.

In May Barack Obama publicly backed the creation of a Palestinian state based on the pre-1967 borders, with agreed land swaps, as an outcome of talks. The US president’s move angered the Israeli prime minister, Binyamin Netanyahu, who wants to retain the large settlement blocks in the West Bank. Obama’s speech was intended to hold out the prospect of a negotiated alternative to the Palestinians’ unilateral plan.

The Israelis say they are ready to resume negotiations on the basis of the Palestinians recognising Israel as a Jewish state. The Palestinians reject this on the grounds it pre-empts talks on the right of return of Palestinian refugees.

Lieberman, a hawkish member of the Israeli coalition government, said on Friday: “In light of [PA President Mahmoud] Abbas’s current stance, the chances for negotiations are zero … Israel is prepared to renew negotiations. The ball is in the Palestinians’ court.”

Israel has launched a global campaign through its embassies against the Palestinian move to garner support for its state ahead of the UN meeting. It is particularly worried about the position of European countries.

David Cameron indicated to Netanyahu in London last month that Britain might back a Palestinian state if there was no substantial progress in negotiations.

Germany and Italy have said they will oppose the Palestinians’ move. France’s position is thought to be similar to the UK’s although it is trying to broker a peace conference as an alternative.

The US is expected to vote against the Palestinian move, and to use its veto in the UN security council over a Palestinian application for membership of the UN. It is applying pressure on Abbas and his officials to rethink their strategy.

However, Palestinian negotiator Muhammad Shtayeh told journalists on Thursday that the Palestinian Authority would press ahead with seeking recognition and membership of the UN regardless of whether talk resume.

A spokesman for Ashton said: “It is more urgent than ever to engage in meaningful negotiations and move the peace process forward … What is needed is a clear reference framework to allow both sides to return to the negotiating table.”

Ashton had called for a new meeting of the Middle East quartet, comprising the EU, US, Russia and the UN, to discuss the issues, he added.

If the Palestinian Authority was dismantled Israel would be obliged under international law to assume full responsibility for the administration of all the territory it has occupied since 1967.

Meanwhile the Turkish humanitarian organisation IHH has announced it is pulling out of the flotilla of ships taking aid to Gaza later this month after the Turkish authorities refused to give permission for the Mavi Marmara to sail.

Nine Turkish activists were killed on board the Mavi Marmara a year ago when Israeli commandos stormed on board in an attempt to prevent it breaching Israel’s sea embargo around Gaza.

Other organisations participating in this year’s flotilla have said they will go ahead without the IHH.

A senior Israeli military official has said the navy will stop the flotilla, using force if necessary.