Eid Da’ajani, 15, suffered severe burns after picking up a mysterious silver canister close to his home Link to this video

The Israeli army has been accused of leaving dangerous munitions near Palestinian homes after two boys were seriously burnt when they picked up a mysterious silver canister which exuded toxic white fumes.

A second canister, discovered nearby less than a week later, was destroyed by the army in a controlled explosion

The army does not deny leaving the devices, but would not identify them and suggested they were left over after training exercises. But the area where they were found does not feature on an army map of designated training areas and the canisters appeared new and unweathered.

Eid Da’ajani, 15, found the canister on 20 February, around 100 metres from his home in the village of Buweib, south of Hebron. The device, around 20cm (7.9 ins) long and 5cm in diameter, was lying in a scrubland where the boys were watching the family’s goats. 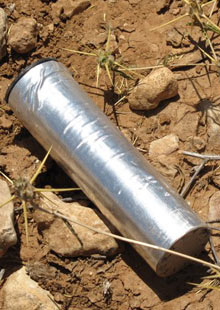 A metal canister found by Mohammed and Eid Da’ajani near their home. Photograph: Conal Urquhart for the Guardian

Eid showed it to his cousin, Mohammed, also 15, who said that it might be a bomb, but Eid picked at the tube’s foil-like covering, causing it to emit dense white fumes. The boys ran away but the gas clung to them and burnt their clothes, melting their shoes and burning their skin.

“The moment the smoke came. I dropped it, but the smoke followed us. When we escaped that’s when the pain started, ” said Eid.

Military experts consulted by the Guardian said the effect of the smoke was similar to that caused by white phosphorous but could not speculate on the nature of the devices from photographs alone.

One suggested that it could be chaff – projectiles fired from an aircraft to decoy enemy missiles – which had not ignited.

Khalid Da’ajani, the boys’ grandfather said that 10 people in the area had been killed by discarded army bombs. “We knew it was the army [which left the cannister] but we had never seen anything like this. The burns seemed to spread along their bodies and all we could do was pour water on them which didn’t seem to help,” he said.

Both boys were taken to the local hospital in Yatta, but when contacted by Eid’s father the Israeli army showed little interest until told that there had been an explosion. Soldiers then questioned the boys and doctors eventually gave them an intravenous transfusion which eased their pain. The family’s request to receive treatment in an Israeli hospital was denied, but two days later, the boys were taken to hospital in Hebron where a team of visiting Italian doctors spent three hours cleaning their wounds.

The hospital report states that boys suffered first to second degree burns to their faces, hands, ankles and legs due to “the explosion of a foreign body”. They were then referred to a burns unit in Nablus, around 60 miles from their home, rather than to an Israeli hospital less than half the distance away.

But last week, Lo’ai, Mohammed’s younger brother discovered an identical canister not far from where the first was found.

He ran away and his family contacted the army. After inspecting the device, troops piled rocks and explosives around it before blowing it up.

In a statement, a spokesman for the Israeli army said: “The area under discussion served in the past as a training field and is no longer in use. The young men were treated on site by a military medical team. Because their injuries were light, they did not require evacuation to an Israeli hospital, and they were evacuated by the Red Crescent.”

Almost two weeks after the event the boys have stopped vomiting and suffering from headaches. Large parts of their skin remain bleached white and blistered. Both seem to be recovering but still find it hard to walk.

A spokesman for Physicians for Human Rights and Israeli non-governmental organisation said that the incident represented a violation of the Palestinians’ right to the health by the Israeli army.

“Leaving bombs unattended on the lands of Palestinians where children and others spend most of their time is a violation of human rights. Worse, is the fact that the army denied these children a better treatment in Israeli hospitals despite the fact that they admitted it was a bomb they had left in the field,” the spokesman said.

Physicians for Human Rights have said that they have written to ask the army for answers about the incident and will take legal action with the family if the army does not explain how two of these dangerous devices appeared in village lands that are regularly frequented by children, adults and animals.