Palestinian Prime Minister Ismail Haniyeh that the arrival of the fleet of “Freedom 2” to the Gaza Strip, which means to remove the last traces of the Zionist siege extended to five years ago.

Haniyeh said in a speech during the opening ceremony, said the field of the martyrs of the Freedom Flotilla, on Monday morning (31-5): “The arrival of the fleet of Freedom 2 solidarity to Gaza will erase the negative effects of the embargo, and will enhance the status of the Palestinian cause in international forums,” and expressed at the same time surprise at the statements of the Secretary General of the United Nations, “Ban Ki-moon,” which he called for obstruction of the fleet and prevent the arrival to the Gaza Strip, and called for the relevant Governments to use their influence to prevent the launch fleets of new could lead to “violent confrontations.”

Haniyeh called “moon” to retreat from his statements, and supporting the Palestinian cause, and not to overlook the ongoing Zionist massacres against the Palestinian people especially in the Gaza Strip.

He pointed out that the promised Palestinian state can not come from the gate manna American or Western, noting that “the State achieved the steadfastness of the Palestinian people and his own blood and jihad, sacrifices and valiant resistance and support the peoples of the Arab and Islamic nation.”

Haniyeh stressed that the tripartite alliance, which was protected by the occupation of a long time is falling apart, pointing out that Iran is out of this alliance for decades.

He pointed out that “Turkey under its new leadership and policies adopted to save the dignity of the nation began to emerge in practice of this alliance, which was dependent upon the occupation, and finally the Egyptian revolution of the system has gone, unfortunately, lived for decades to serve the policy of America and Zionism.”

He predicted that the future of the occupation in the darkness, and the region will witness a lot of good to the cause of Palestine and the peoples of this region.

Haniyeh renewed praise for Egypt, after its decision to open the Rafah crossing, although it came under pressure in the U.S. and Zionist severe.

He said that this resolution is an expression of free will and affirms the sovereignty of Egypt at the crossing, which means the return of Egypt Kthagl strategic in supporting the Palestinian issue, stressing that the Egyptian people – who was not involved day in the siege of Gaza, but the participation of Egyptian rule – is to decide today does not accept the dictates of than one. 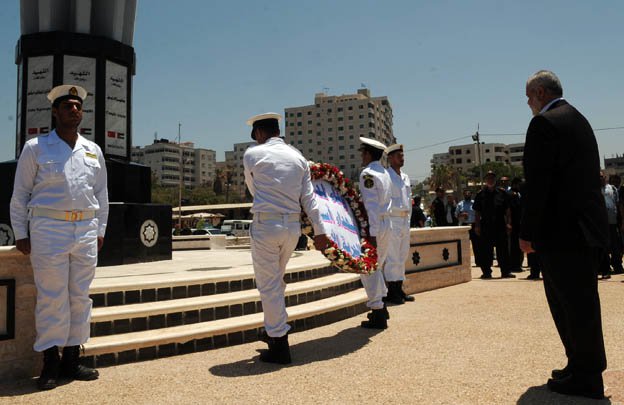