Mathilde De Riedmatten, deputy head of the ICRC’s sub-delegation in Gaza, talks about the situation in the coastal enclave and about how ordinary Gazans manage to carry on with their daily lives.

How would you describe the humanitarian situation in the Gaza Strip today?

The ICRC is concerned about the fact that the 1.5 million people in the Strip are unable to live a normal and dignified life. Almost no one can leave the Gaza Strip, not even to go to the West Bank, where many Gazans have family or previously had work.

Health-care facilities are suffering from the restrictions imposed by Israel on the transfer of medical equipment, building materials and many basic items needed for maintenance. Water and sanitation facilities have been under strain for many decades. The fact that they remain even barely in working order is due to the efforts of certain humanitarian organizations. Buildings that have been in need of repair for several years and the many buildings that were destroyed during the Israeli military operation in Gaza in 2008-2009 cannot be repaired or rebuilt as long as basic building materials, such as concrete, are not allowed into the Gaza Strip in meaningful quantities.

Violence claims civilian lives in the Strip on a regular basis. In recent months, many people have been killed or injured in escalating violence and sometimes even in open hostilities. Security incidents in the area between Gaza and Israel frequently result in loss of life or in destruction of property or livelihoods. We deplore the civilian casualties and continue to remind all parties that civilians must be spared the effects of the hostilities. Every feasible precaution must be taken to avoid civilian casualties.

ICRC staff constantly monitor the situation of civilians, such as farmers and rubble collectors, who have no alternative but to live and work in areas close to Israel. The area along the fence extending 300 metres into Gaza has been declared a no-go zone by the Israel Defense Forces. A far bigger area, extending nearly one kilometre into the Gaza Strip, is considered dangerous because of the Israeli military’s incursions and use of live ammunition. Whenever civilians suffer direct harm in such incidents, we document the cases and raise our concerns bilaterally and confidentially with the parties concerned.

Can you tell us more about the economic situation?

Gaza is more dependent than ever on outside aid. For young people – fully 50 per cent of Gaza’s 1.5 million residents are under 18 years of age – there is a crushing lack of prospects, and it is a constant struggle for them to maintain hope in the future.

The strict limits on imports and the almost absolute ban on exports imposed by Israel make economic recovery impossible. The unemployment rate currently stands at nearly 40 per cent. It will remain ruinously high as long as the economy fails to recover. This difficult situation exacerbates the considerable hardship already caused by the collapse of previously prosperous branches of the economy.

Over the years, access to land suitable for agriculture has been eroded by restrictions imposed in the areas near Israel and the levelling of land and destruction of trees by the Israel Defense Forces. To make matters worse, the high price or even total lack of some farm inputs such as fertilizer, pesticides, etc., and the lack of export opportunities have weighed heavily on the primary sector. In addition, many fishermen have lost their livelihood as a result of Israel reducing the area at sea within which it allows fishing to three nautical miles from Gaza’s coastline.

Because Israel retains effective control over the Gaza Strip, in particular by maintaining authority over the movement of people and goods, it must fulfil its obligations under the law of occupation and allow the civilian population to lead as normal a life as possible.

Israel eased the closure in June 2010. Has that had a positive effect on the lives of ordinary people in Gaza?

The restriction on the movement of people out of Gaza remains unchanged. The current Israeli permit system, combined with rigorous controls, means that only people in need of medical attention who fulfil strict security criteria are allowed to leave either through the Rafah crossing into Egypt or through the Erez crossing into Israel. Very few other people are allowed out of Gaza.

The entry of goods into Gaza is also still highly restricted, not only in terms of quantity but also in terms of the particular items allowed. Long delays are frequent. Some goods that are allowed in are so expensive that their availability hardly matters to the vast majority of the population, who could never afford them. Although there has been media coverage of the export of certain cash crops such as carnations and strawberries, the actual level of exports from the Gaza Strip remains close to zero. Imports of construction supplies and raw materials are still mostly banned, even though they are vital to the territory’s infrastructure and economic recovery.

Unless there is political change that results in freedom of movement for Gazans, increased imports of a variety of goods and significant exports, there will be no improvement.

How can the ICRC help mitigate the effects of the closure?

To help families make ends meet, we have developed cash-for-work programmes and launched projects that provide farmers with tools and seedlings to improve crop yields.

We are also doing what we can to make sure that injured and sick people receive proper medical attention by providing support for the emergency services of the Ministry of Health and the Palestine Red Crescent Society. The Society provides pre-hospital emergency care and counselling services alongside the many other humanitarian tasks it performs within the Gaza Strip. The ICRC also provides support for the Artificial Limb and Polio Centre, the only facility of its kind in the Gaza Strip, which treated over a thousand patients in 2010.

Our water and sanitation engineers are focusing their efforts on the treatment of wastewater. At a plant that was recently completed in Rafah, some of the treated wastewater can safely seep into and replenish the aquifer, which remains the only source of clean water in the Gaza Strip. Thanks to the latest upgrades at the plant, treated wastewater could soon be used for agricultural purposes such as irrigating trees. 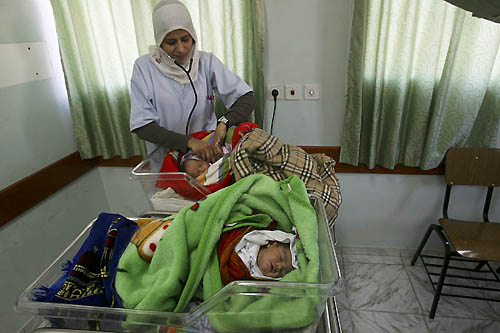 June 2010. Northern Gaza Strip. Palestinian children sleep in a tent. The tent was erected after their house was destroyed during the Israeli military operation in 2008/2009. © Reuters / M. Salem 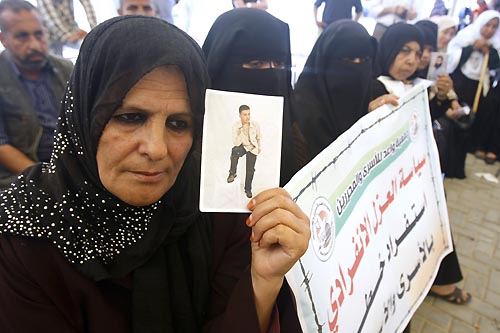 Gaza. A Palestinian woman with a photograph of a relative held in an Israeli jail. © Reuters / I. A. Mustafa 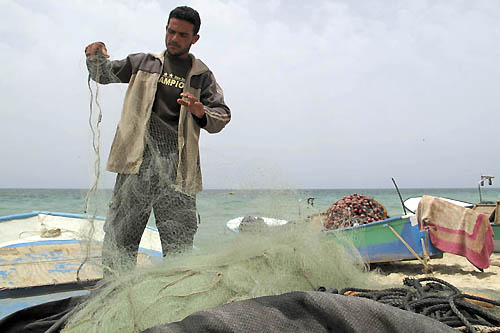 Gazan fishermen have been hard hit by restrictions on the areas in which they are allowed to fish. © ICRC / C. Goin / il-e-01979