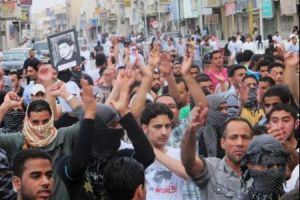 Protesters in Qatif demand the release of political prisoners

Saudi protesters have poured into the streets in the eastern city of Qatif, condemning Manama’s brutal crackdown on anti-regime demonstrators.

Expressing solidarity with Bahraini protesters, Saudi demonstrators on Friday urged the government to stop helping Manama in suppressing the uprising in the neighboring country and immediately withdraw its troops.

Since the deployment of Saudi troops in mid-March, Bahrain has launched a harsh crackdown on anti-government protesters, rounding up senior opposition figures and activists in dawn raids and arresting doctors, nurses, lawyers and journalists who voiced support for the protest movement.

Last week, Bahraini authorities announced that Saudi troops would remain in the Persian Gulf kingdom even after the state of emergency is lifted in June.

Despite, international condemnation of Saudi occupation of Bahrain, a Saudi official said, “This is the initial phase and Bahrain will get whatever assistance it needs. It’s open-ended.”

Saudi demonstrators also called for human rights reform, freedom of expression and the release of political prisoners some held without trial for more than 16 years.

Saudi Arabia’s east has been the scene of anti-government protests over the past months and authorities have arrested scores of people, including bloggers and writers, for taking part in protest rallies.

According to Human Rights Watch, more than 160 dissidents have been arrested since February as part of the Saudi government’s crackdown on anti-government protesters.