Egypt has shown independence from the US by improving relations with Iran and changing its approach to Palestine. 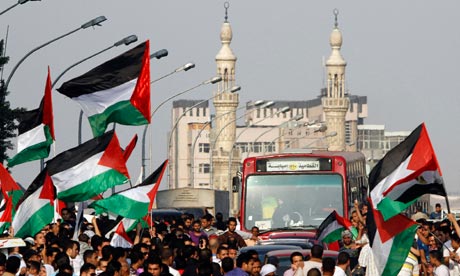 Egyptians wave Palestinian flags at a ‘Nakba day’ demonstration outside the Israeli embassy in Cairo.

Egypt faces many uncertainties after the revolution, but two surprisingly swift changes in its foreign policy have demonstrated that the post-Mubarak era may produce change for the wider region too.

The foreign minister, Nabil al-Araby, has already overseen significant and assertive shifts on the Palestinian question as well as an easing of decades of tensions with Iran. Both moves signalled greater independence from the US, which gives Egypt $1.3bn in annual aid – more than any other country except Israel.

Egypt’s brokering of a long-awaited reconciliation agreement between Fatah and Hamas is the most eyecatching of the innovations, and one which could prove a game-changer for the region’s most intractable conflict. The Palestinian factions had their own domestic reasons for signing, but Cairo was still able to take the credit.

Nabil Fahmy, a former ambassador to Washington who is also tipped as a likely Araby successor, insists the country’s goals remain the same. “While our actions may change, our fundamental objective will not,” he told the Guardian. “We still want a comprehensive peace in the Middle East, but how we get there will change. There is a shift, but no contradiction.”

Araby was the first Egyptian foreign minister without a picture of a king or a president in his office – one reason why public opinion has been more closely factored into his diplomacy. He looks likely to remain influential in future.

Up to a point: a recent Pew study showed 54% of Egyptians want to see the 1979 peace treaty with Israel annulled, though the armed forces council made clear from the start that the treaty would be respected along with other international obligations. Mass demonstrations outside the Israeli embassy to mark “Nakba day” last weekend – broken up by the security forces – underlined the domestic sensitivity of the issue. Diplomats say Egypt wants to re-negotiate the agreed limits on military deployments in Sinai.

The strategic shift is away from the old assumption behind Sadat’s groundbreaking deal: that Egypt could go it alone with what was excoriated as a “separate peace”, and abandon the Palestinians.

Hence the importance of Egypt’s decision, so far only in principle, to reopen its Rafah border with the Gaza Strip to normal traffic – its way of easing the humanitarian plight of the 1.5 million Palestinians living under Hamas rule since 2007.

Freedom of movement between Egypt and Gaza would have huge implications, for Palestinians needing medical care as well as trade opportunities and a possible revival of the economy.

Rafah will not, warned Fahmy, ever be “a Schengen border” (the EU’s passport-free travel area) because security considerations remain. But it will remove the sense that Cairo is complicit in the Israeli siege – a position Araby described as “shameful”.

The détente with Iran is no less striking. Araby talked of opening “a new page” after years of ill-tempered exchanges over Iran’s refusal to remove a Tehran mural hailing the “martyr” Khaled el-Islambouli, Sadat’s assassin. Iran’s resentment dates back to 1979 when Sadat gave sanctuary to the shah and made peace with Israel.

The thaw has angered Gulf hawks Saudi Arabia and the United Arab Emirates, who were dismayed by Mubarak’s overthrow and worry that a loyal US ally has been abandoned. Araby smartly rebuffed Israeli criticism by pointing out that it did not object that Turkey and Germany had diplomatic relations with Tehran.

Alarm bells rang in February when the Egyptian military allowed two Iranian warships to pass through the Suez canal despite objections from Israel and the US.

The contrast with the old regime is striking since Mubarak always made great play of his hostility to Iran and was quick to blame its Lebanese ally, Hezbollah, for acting against Egyptian security – even if the evidence seemed dubious.

The view in Cairo is that foreign policy is once again becoming the preserve of the foreign ministry after years in which it was run by the president and his intelligence service under General Omar Suleiman.

Suleiman’s successor, Murad Mowafi, who helped seal the Hamas-Fatah deal, also paid an early visit to Damascus, prompting expressions of alarm from the US.

Overall, the hope is that Egypt will regain the regional clout it lost in recent years due to its subservience to the US – though the relationship with Washington remains vitally important, especially for the military.

“Egypt was very weak and very corrupt,” said Osama Ghazali Harb, leader of the Democratic Front party. “But when you have a democratic Egypt and a confident government it can return to its proper place.”

Anxiety about Egypt’s new diplomatic style is overstated, Fahmy suggested: “Everything we are saying vocally now we have said privately before.”