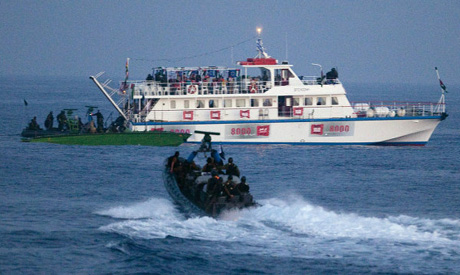 Israeli forces approaching one of the ships from the freedom flotilla headed for Gaza, May 2010,
The Israeli Defence Forces’ broadcast reported Wednesday noon an official’s comments that the country would prevent the second freedom flotilla from reaching Gaza “at all costs.”

The source said that a consensus emerged during the meeting of the Ministers Committee on Security Affairs Wednesday on the necessity of maintaining a strict and complete blockade on Gaza, even if this entails using armed force in preventing the flotilla from entering the strip.

The broadcast mentioned that the Israeli navy and its elite forces are running drills around the clock to use the “wisest” ways in obstructing the flotilla and putting it under their control.

Israeli sources talking to the broadcast said that the elite units – especially the naval commando unit Shayetet 13 (Flotilla 13) – are planning to use new military techniques in their mission to stop the flotilla without causing the death of foreigners onboard.

The military sources stressed that in contrast to the previous episode, the army intends to arrest foreign members of the flotilla and referring them to prosecution in military tribunals for “violating Israeli laws.”

The Hebrew edition of the Israeli daily Haaretz in turn revealed Wednesday that senior Israeli ministers will hold talks regarding a suggestion that the flotilla organisers be informed that they may resume their trip to Gaza on condition that Israel searches the ships in Ashdod or in another port outside of Israel.