Turkish movement says 10,000 people want to board ship for June’s Gaza-bound flotilla. ‘Israeli attack could benefit Palestinians,’ IHH leader says. ‘Even if we sacrifice martyrs, we will be on justice’s side’

The Turkish IHH organization announced Wednesday that the Mavi Marmara ship, which was subjected to a deadly IDF raid while attempting to breach Israel‘s maritime blockade on the Gaza Strip last May, is ready for set sail once more.

“Even if we sacrifice shahids (martyrs) for this cause, we will be on the side of justice,” IHH President Bulent Yildirim said in a recent television interview.

According to the Islamic organization, which is recognized by Israel and other nations as a terrorist movement, the Mavi Marmara – upon which nine Turkish activists were killed in a clash with Navy commandos – has suffered severe damage during last May’s events. The IHH said the vessel’s engine was intentionally destroyed when the ship was towed by the Israeli authorities to the Ashdod Port, and its deck and command bridge were wrecked.

The ship was consequently repaired and renovated in Istanbul, Turkey; its deck and the passenger seating were completely redone. According to the IHH, the vessel is ready to cruise again. 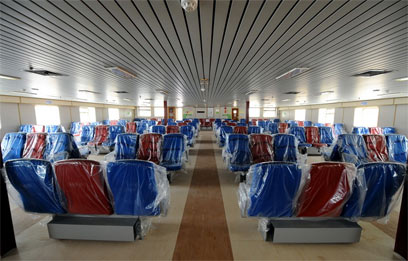 A few weeks ago, the organizers of the upcoming flotilla postponed the departure of the Gaza-bound maritime convoy to the end of June, and Israeli elements speculated that the measure was taken because the event failed to attract participants. But the IHH said that the event was delayed because of the elections in Turkey, and that 10,000 people have already signed up to take part. The movement allows registration through its website, and has been distributing applications across Turkey and abroad.

In an interview with Turkey’s Kanal 5 television station, Yildirim said that the turn out for the flotilla is unprecedented, and denied Israel’s claim that people are afraid of participating.

“Our goal is to gather a million people who want to board the flotilla ship,” he said. “From these applicants we will choose a limited number of people, but each of the applicants will be considered as though he is on the flotilla. We are not afraid, and want to convey the message to Israel that we are coming.”

Yildirim added that an “Israeli attack” would actually serve the purpose of the flotilla. “This time, all of the world’s nations will stand against (Israel),” he said. “It could benefit the Palestinians.”

He said that Arab Israeli MKs and Israeli television channels expressed interest in boarding the flotilla. “There is great opposition to the government’s policies,” he said.

According to Yildirim, the IHH will hold protests in Turkey and around the world, and will send an aid ship to Gaza through the Egyptian El Arish port in the end of May.

“With the help of donors, we will send $100 million-worth of aid this time,” he said. “Israel beware, don’t you dare to harm Palestine, because when you harm it, the number of people on Palestine’s side grows and becomes stronger, and you become smaller.”