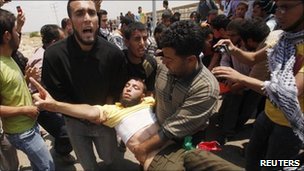 Israeli forces have fired on groups of protesters at border crossing points with the Palestinian territories, Syria and Lebanon.

Unconfirmed reports say several people have died, and dozens have been injured.

At least 45 Palestinians were injured as Israeli forces fired at a group near the Erez crossing in Gaza, medics said.

Palestinians are marking the Nakba or Catastrophe, their term for the founding of the Israeli state in 1948.

Hundreds of thousands of Palestinians fled or were forced out of their homes in fighting after its creation.

The BBC’s Jon Donnison, in the West Bank town of Ramallah, said this year’s Nakba protests have been given impetus by the uprisings in countries across the Middle East and North Africa.

In Ramallah there have been clashes at a border crossing into East Jerusalem.

Palestinian protesters have been throwing stones at Israeli security forces, who have been firing tear gas and rubber bullets.

The Israeli military said it only fired warning shots on the occupied Golan Heights as protesters tried to breach a border fence. But unconfirmed reports said four people had been killed and at least 10 people injured.

The incident took place near the village of Majdal Shams.

Israeli seized the strategic territory from Syria in 1967.

Lebanese military officials said at least 10 people were injured in shooting at his country’s border with Israel.