Reports suggest warrants could include Gaddafi and his son Saif al-Islam in move intended to increase pressure on Tripoli. 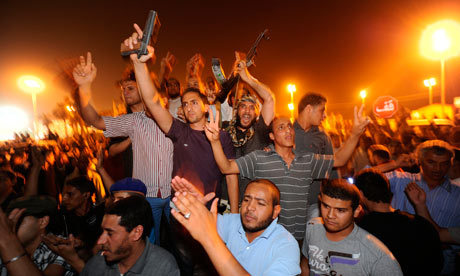 Luis Moreno-Ocampo, chief prosecutor of the International Criminal Court, is to brief the council about crimes committed by Muammar Gaddafi‘s forces since the Libyan uprising began in mid-February.

Western diplomats say the move is intended to ratchet up international pressure on Tripoli. Ocampo revealed that up to five warrants are likely to be issued in the next few weeks with the approval of the ICC’s pre-trial chamber.

No names have been disclosed. But Al-Arabiya TV reported that the warrants could include Gaddafi himself and his son, the discredited reformist Saif al-Islam, who has strong UK links. It said others being targeted include Libya‘s former foreign minister, Moussa Koussa, who defected to the UK, and Abu Zeyd Omar Dorda, director general of the Libyan External Security Organisation.

Koussa is the most important defector from the regime so far, and British officials had hoped his defection might persuade other key Libyans to abandon Gaddafi, although observers warn of the potential for a clash between a pragmatic approach to weakening the regime and a principled commitment to international criminal law.

The security council voted unanimously in February to refer Gaddafi’s violent crackdown against anti-government demonstrators to The Hague-based ICC.

That move was widely criticised as premature, leaving the Libyan leader and other key officials no exit strategy as the international response to the crisis escalated into the armed action now being undertaken by Nato.

Switzerland, meanwhile, has frozen assets worth up to £585m connected to Gaddafi and the former presidents of Egypt and Tunisia. Micheline Calmy-Rey, Switzerland’s president and foreign minister, disclosed that of the total amount of frozen assets, 957m in Swiss francs, some SFr360m (£246m) is linked to Gaddafi and his associates, SFr410m (£280m) is tied to Hosni Mubarak, the Egyptian president who stood down in February after 18 days of protests, and SFr60m (£41m) to Zine al-Abidine Ben Ali, the Tunisian president who fled in January after an uprising.

In Cairo, Mubarak’s sons, Gamal and Alaa, face renewed questioning by a public prosecutor on their roles during their father’s 30-year rule. Mubarak is being treated for a heart condition in a hospital in Sharm al-Sheikh, where the family has remained since February.

“These amounts are frozen in Switzerland following blocking orders by the Swiss government related to potentially illegal assets in Switzerland,” said the Swiss authorities. “It is not just money, there are real estate assets.”

The UK has only provided an update on its efforts to freeze the assets of the Gaddafi regime. Speaking in March, David Cameron said £12bn had been frozen by the UK after the Libyan Central Bank and the Libyan Investment Authority were added to the asset-freezing list. No updates have been provided on Mubarak or Ben Ali, although the sums are expected to be smaller because neither has sovereign wealth funds of the size run by the Libyan Investment Authority. The fate of billions in public funds alleged to have gone missing is a talking point in all three countries. The US has so far seized $34bn (£20.5bn) in assets connected to Gaddafi, although it has yet to act against any assets linked to Ben Ali or Mubarak and their associates.

Calmy-Rey did not give details of the banks holding the assets. Switzerland is trying to become more open about its banking, in part because of pressure from the US three years ago on Swiss bank UBS to reveal the identities of 20,000 clients.

Officials said that the decision to reveal the sums frozen indicated that the Swiss felt they were unlikely to uncover many more assets linked to the three.

Although amounts have been revealed, none of the assets has been released, as there is insufficient proof they were obtained illegally. While Tunisia and Egypt have begun steps to reclaim the assets, Gaddafi remains in the control of Libya’s government.

Switzerland has begun returning assets to Haiti, 25 years after freezing money belonging to Jean-Claude Duvalier, its former leader. The Swiss said they believed some SFr5.8bn (£4bn) had been frozen and that it could now “initiate forfeiture proceedings”.

The precise wealth of the three Middle East leaders is unclear. Forbes estimated in 2008 that the Tunisian president’s fortune was $5bn. In February, officials in the Serious Organised Crime Agency began the process of tracing the bank accounts of Mubarak and his cabinet in the UK, while Britain froze the assets of Gaddafi and his five children amid reports the Libyan leader had moved £3bn to Britain. Some £900m of Libyan currency in storage at a secure compound in the north-east of England was impounded.