The Cast Lead Operation commander speaks bluntly on the Israel’s view of Gaza as an ‘ideal training zone’ for its soldiers and weaponry. 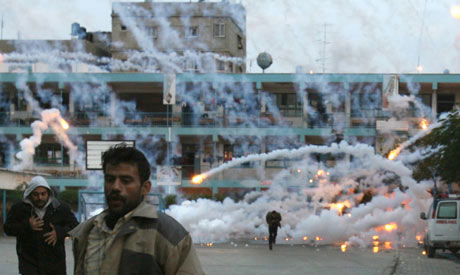 Around 1,400 Palestinians and 13 Israelis were killed in the three-week war

Israel used the war in Gaza in 2008 as a training opportunity for its armed forces to test new weapons, designate Israeli military chief of staff has revealed.

In a speech at the Begin-Sadat Center of Strategic Affairs at Bar-Ilan University, Major General Yoav Galant said that Gaza was an “ideal training zone” as it lacks a strong enemy that could inflict serious casualties upon Israel.

Galant was the operation commander of Israel’s Cast Lead Operation on Gaza between December 2008 and January 2009 in which more than 1600 Palestinians were killed. Most of the fatalities were among women and children.

Under his command, the Israeli armed forces openly used white phosphorus shells fired from 155mm artillery guns in the crowded Gaza Strip which were .

“Although Israel’s military capability is much stronger than [that of] Hamas, we consider them as our fiercest enemy,” he said.

Galant added that Palestinians in the Gaza Strip had improved their rocket firing capabilities, asserting that firing rockets “isn’t only an act of terror, it is a challenge to Israel’s very existence.”

With regards to the wave of Arab uprisings, Galant expressed his view that that none of the ongoing revolutions in the Middle East have any positive short or long-term potential for the future of Israel’s security.

Galant expects that the region will represent a major instability threat as in his opinion it will be ruled by radical “Islamic extremists.”