Unrest in Syria has greater potential consequences than any other event in the Arab Spring so far. 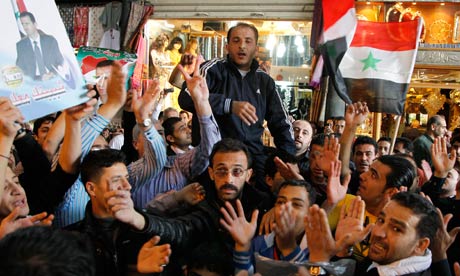 Supporters of President Bashar al-Assad wave the flag in Damascus.

As decades-old dictatorial regimes crumbled around him in January, Syria’s president, Bashar al-Assad, denied that revolution would spread to his country. Balhermep, the Ba’athist concept of “the ruling of the people”, would keep his country together.

But as demonstrations in towns and villages across Syria seemed only to be spreading last week, even as the regime intensified its crackdown, that notion appeared to be unravelling.

The international consequences of regime change in Syria are many and complex. The fallout will be particularly marked in Lebanon and Palestine, and there will also be impacts on the country’s alliances with Iran, Turkey, and Iraq, and, perhaps most importantly, on its relationship with Israel.

Damascus’s influence has always been strong in these areas. Syria is vital to Hezbollah, which leads a Lebanese coalition supporting Assad. Lebanon has no land borders except with Syria on the east and north, and with Israel to the south. To the west is the Mediterranean, swimming with battleships and an international force to prevent the smuggling of weapons. Hezbollah’s links with Syria are, in turn, the linchpin of the alliance between Tehran and Damascus, for the party’s first loyalty is to Iran and the supreme leader of its Islamic revolution, Ayatollah Ali Khamenei.

The fall of the Assad regime would mean the loss of Iran’s only ally in the region and thus a weakening of the clerical regime. This could boost the enthusiasm of Iranian reformers, who have been sidelined and repressed since the disputed presidential elections in Iran in 2009.

Damascus also hosts at least 10 Palestinian factions, most prominently Hamas and Islamic Jihad. Analysts say that Assad’s tacit support comes not from interest in Arab causes but a desire to gather cards to play against the US and Israel in negotiations to win back the Golan Heights.

The late Palestinian president Yasser Arafat and his successor Mahmoud Abbas consistently complained about Syria and Iran’s interference in Palestinian affairs, which has always frustrated any reconciliation between Hamas, which controls Gaza, and Fatah, which controls the West Bank.

The irony is that the reconciliation process has been reinvigorated by the signing of a treaty between the two rival factions in Cairo last week. Observers have noted this détente was only possible due to the distractions Assad faces at home.

Now that the Syrian Muslim Brotherhood is leading the opposition movement at home, Hamas is reported to be looking for a new HQ elsewhere.

Further east, Iraqi governments have long accused the Assad regime of facilitating fundamentalist attacks inside Iraq and say that Damascus harbours many of the dissolved Iraqi Ba’ath party’s former leadership – men Baghdad would like turned over for trial.

Turkish prime minister Recep Tayyip Erdogan was the first to publicly scold Assad on more than one occasion for not taking his advice to reform. Turkey has recalled its ambassador from Syria for consultations and sent its head of intelligence, Hakan Fidan, to Damascus.

There is no doubt that this reflects the Turkish concern that events in its close neighbour Syria may turn into a sectarian or religious war which would have a direct impact on Turkey. That fear was expressed by the Turkish foreign minister Ahmet Davutoglu on Friday when he warned of the possibility of a mass exodus of Syrians fleeing a potential bloodbath.

Meanwhile, behind closed doors, leaders in Israel fear the fall of Assad could lead to the rise of a conservative Islamic regime. An end to the fragile stability of the Golan Heights, occupied by Israel since 1967, is a particular worry. Leaking of the news that Tel Aviv fears the Golan front could erupt again came as a surprise to many in the Arab world in light of the declared enmity between Israel and the Ba’ath regime.

With their allies in Egypt overthrown, Israel may not welcome yet more regime change so close by.

Upheaval in Syria will not only affect its immediate neighbours – it will reshape the balance of power in the Middle East more than any event in the Arab Spring thus far.