Mumbai: The latest in the series of agitations against the ban on burqa in France is one organized by the women wing of Jamaat-e-Islami Maharashtra and the Girls Islamic Organisation of India (GIO). The Muslim women groups protested against the ban on Wednesday in Azad Maidan of Mumbai.

Chanting slogans against France President Nicolas Sarkozy, hundreds of women braved the hot sun and gathered in Azad Maidan from every nook and corner of India’s commercial capital. 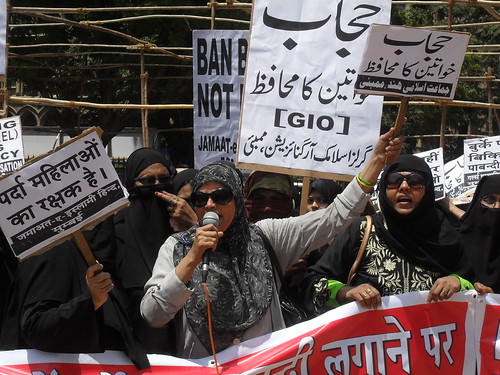 First year BUMS student Amina Khanam in her teens and the district coordinator of GIO, Mumbai came from Meera Road, nearly 60 km from South Mumbai to attend this agitation. She said, “Banning Burqa is undemocratic and the infringement of democratic right, we will agitate against this injustice.”

Europe is the mother of Secularism where everybody has a right to practice one’s religion and therefore Nicolas Sarkozy went against the basic tenets of secularism, Amina added. 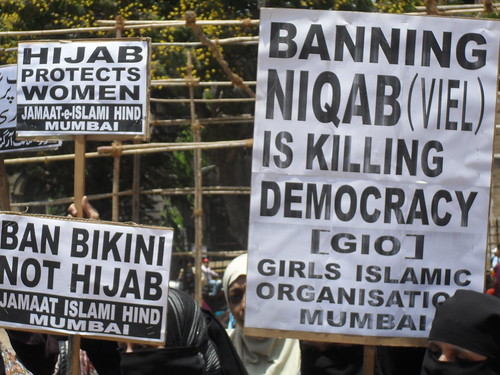 Salma Baig, President of JIH, Ladies Wing, Mumbai, is very agitated and sees political angle in banning the burqa. She said, while talking to TwoCircles.net, “President Nicolas Sarkozy is trying to hide his failure and has resorted to xenophobia to attract far-right voters in France.”

Which problem will be solved by banning Burqa, she asked. “Everyone has a right to wear what he or she likes and it’s very ironic that roaming without clothes is allowed but burqa is banned.” 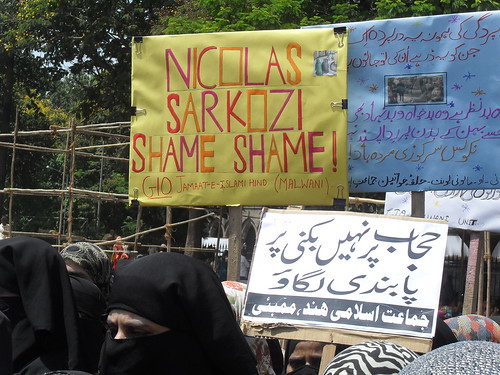 Proponents of the law in France say face-covering veils don’t square with the French ideal of women’s equality or its secular tradition. Answering to this question Salma Baig says, “Banning Burqa will not bring equality but will lead to injustice in the society. It’s not a question of equality but freedom of choice.”

Protesters were shouting the slogan that burqa is our ornament and we will never leave it, we want Hijab, Hijab is our right. They were carrying placards with slogans like Ban Bikini not Burqa, Nicholas Sarkozy shame, shame.

Salma Baig and Amina Khanam demanded that Indian Government must represent their case with the France Government as our Prime Minister did in the case of Sikhs turban.