What we are observing in Libya is the rebirth of colonialism.  Only, this time, it is not individual European governments competing for empires and resources. The new colonialism operates under the cover of “the world community,” which means NATO and those countries that cooperate with it. NATO, the North Atlantic Treaty Organization, was once a defense alliance against a possible Soviet invasion of Western Europe. Today, NATO provides European troops in behalf of American hegemony. 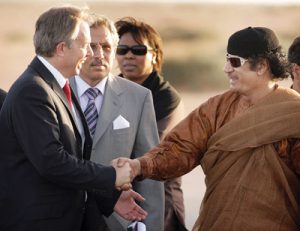 Washington pursues world hegemony under the guises of selective “humanitarian intervention” and “bringing freedom and democracy to oppressed peoples.” On an opportunistic basis, Washington targets countries for intervention that are not its “international partners.”  Caught off guard, perhaps, by popular revolts in Tunisia and Egypt, there are some indications that Washington responded opportunistically and encouraged the uprising in Libya. Khalifa Hifter, a suspected Libyan CIA asset for the last 20 years, has gone back to Libya to head the rebel army.

Gaddafi got himself targeted by standing up to Western imperialism. He refused to be part of the US Africa Command.  Gaddafi saw Washington’s scheme for what it is: a colonialist’s plan to divide and conquer.

The US Africa Command (AFRICOM) was created by order of President George W. Bush in 2007. AFRICOM describes its objective:

Our approach is based upon supporting U.S. national security interests in Africa as articulated by the President and Secretaries of State and Defense in the National Security Strategy and the National Military Strategy. The United States and African nations have strong mutual interests in promoting security and stability on the continent of Africa, its island states, and maritime zones. Advancing these interests requires a unified approach that integrates efforts with those of other U.S. government departments and agencies, as well as our African and other international partners.

Forty-nine countries participate in the US Africa Command, but not Libya, Sudan, Eritrea, Zimbabwe, and Ivory Coast. There is Western military intervention in these non-member countries except for Zimbabwe.

One traditional means by which the US influences and controls a country is by training its military and government officers. The program is called International Military and Education Training (IMET). AFRICOM reports that “in 2009 approximately 900 military and civilian students from 44 African countries received education and training in the United States or their own countries. Many officers and enlisted IMET graduates go on to fill key positions in their militaries and governments.”

AFRICOM lists as a key strategic objective the defeat of the “Al-Qaeda network.” The US Trans Sahara Counter Terrorism Partnership (TSCTP) trains and equips “partner nation forces” to preclude terrorists from establishing sanctuaries and aims to “ultimately defeat violent extremist organizations in the region.”

Apparently, after ten years of “the war on terror,” an omnipotent al-Qaeda now ranges across Algeria, Burkina Faso, Chad, Mali, Mauritania, Morocco, Niger, Nigeria, Senegal and Tunisia in Africa, across the Middle East, Afghanistan, Pakistan, the UK and is such a threat within the United States itself as to require a $56 billion “Homeland Security” annual budget.

The al-Qaeda threat, a hoax as likely as not, has become Washington’s best excuse for intervening in the domestic affairs of other countries and for subverting American civil liberties.

Sixty-six years after the end of World War II and 20 years after the Collapse of the Soviet Union, the US still has a European Command, one of nine military commands and six regional commands.

No other country feels a need for a world military presence.  Why does Washington think that it is a good allocation of scarce resources to devote $1.1 trillion annually to military and security “needs”?  Is this a sign of Washington’s paranoia?  Is it a sign that only Washington has enemies?

Or is it an indication that Washington assigns the highest value to empire and squanders taxpayers’ monies and the country’s credit-worthiness on military footprints, while millions of Americans lose their homes and their jobs?

It is paradoxical that Washington and its European “partners” are seeking to extend control over foreign lands abroad while immigration transforms their cultures and ethnic compositions at home.  As Hispanics, Asians, Africans, and Muslims of various ethnicities become a larger and larger percentage of the populations of the “First World,” support for the white man’s empire fades away.  Peoples desiring education and in need of food, shelter, and medical care will be hostile to maintaining military outposts in the countries of their origins.

Who exactly is occupying whom?

Parts of the US are reverting to Mexico. For example, demographer Steve Murdock, a former director of the US Census Bureau, reports that two-thirds of Texas children are Hispanics and concludes: “It’s basically over for Anglos.”

Ironic, isn’t it, while Washington and its NATO puppets are busy occupying the world, they are being occupied by the world.