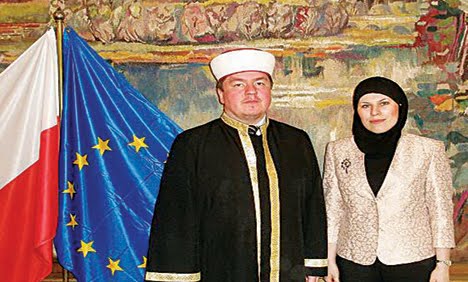 I think this is the first time that a European Muslim says radicalism and terrorism in the Muslim world should be dealt with since they reflect back on European Muslims. Or in other words, that Muslim terrorism is cause for ‘Islamophobia’.

Via the News International:

Mufti Tomasz Miskiewicz, head of the Muslim Religious Union (MRU) in Poland, visited Pakistan from April 4-10. The Mufti, who graduated from the Institute of Teaching Arabic Language for Foreigners and studied Theology at Islamic University of Madina in Saudi Arabia, met Pakistani officials and delivered lectures at the International Islamic University and Quaid-i-Azam University in Islamabad during his stay.

He was accompanied by his wife, who is the project manager of the MRU and accompanies him on his official visits.

She speaks fluent English and was charming and friendly, answering questions and giving information that was very helpful in getting to know the Muslim community in her country.

After being introduced by Dr. Andrezej Ananicz, the new ambassador of Poland, briefing media persons about the visit of Mufti Miskiewicz, said he had a fruitful visit and exchanged views with various scholars and heads of religious institutions. In reply to questions by media persons, he said suicide bombings were ‘haram’ because suicide was forbidden in Islam and killing innocent persons a crime.

He said he has offered to play the role of a mediator between religious extremists and authorities in Pakistan. He believes extremist violence in Pakistan is giving a bad name to Muslim minorities in Europe.