Skip to content
By Reham Alhelsi
10 April, 2010
A Voice From Palestine 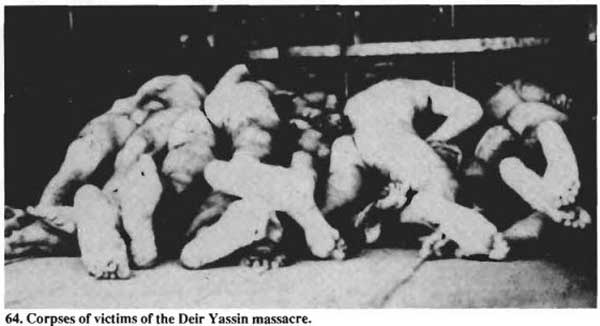 Since the arrival of the first Zionist to Palestine, hundreds of massacres have been committed against unarmed Palestinian civilians in the name of “Israel”, making this entity synonym to death and destruction. One of the worst Zionist massacres committed against Palestinians is the Deir Yasin massacre. Defenceless Palestinian civilians were tortured before being massacres and their bodies mutilated. Women and children were raped, babies were butchered and pregnant women were bayoneted. Deir Yassin, a Palestinian village located at the outskirts of Jerusalem, had a population of around 750 on the eve of 09.04.1948. The village was surrounded by 6 Zionist colonies, the closest being Giv’at Sha’ul, and the Zionist colonists had blocked the main access road connecting Deir Yasin with Jerusalem, placing Deir Yasin under an almost total blockade. To protect the village from the attacks of the Zionists, the villagers of Deir Yasin formed a local guard whose weaponry consisted only of a few old rifles and very little ammunition. Because the village was surrounded by several Zionists colonists, was besieged and continuously threatened by them and because the villagers had little means to protect themselves, Deir Yasin agreed to a non-aggression pact with the Zionist colonists just one month before the massacre. Nevertheless, on 09.04.1948, and in a joint operation coded “Operation Unity” the 3 terrorist gangs Irgun, Lehi (Stern) and Haganah (later Zionist terrorist army) attacked the peaceful village with the aim of killing as many Palestinians as possible and to force the rest out of their homes and lands. At 4:30 on Friday morning, 09.04.1948, and while the villagers slept, the Zionist terror gangs surrounded Deir Yasin. Palestinians woke up to the sound of loud speakers ordering them to leave the village, and the unsuspecting residents went out of their homes to investigate the situation, and it was then that the massacre began. The Irgun attacked the village from the south east, Stern attacked it from the east while the Haganah bombarded the village with mortars. The Palestinian village guard tried to protect the residents and to stop the Zionist gangs, they fought heroically but with their meagre weaponry had little chance against three fully armed terror gangs. The Zionists opened fire at whoever tried escaping the village, and then moved into the village and started their “clean up”: they moved from one house to the other raping women, 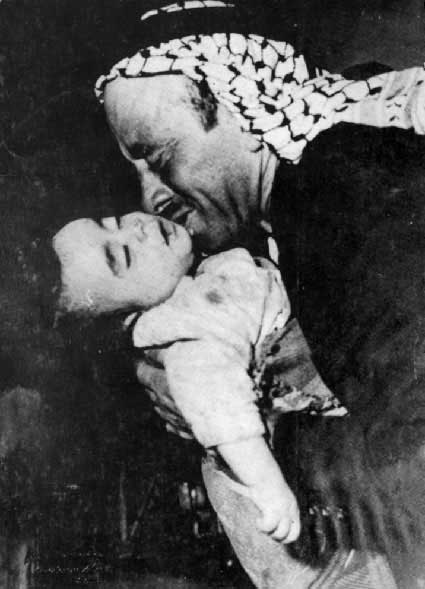 slaughtering children and killing whoever was inside with machine guns and knives. Whole families were lined up against the wall and executed. Pregnant women were bayoneted and the bodies of children were mutilated. Money and jewellery were snatched from the bodies of victims and other personal belongings were stolen before houses were burnt. Of the 144 houses of Deir Yasin, at least 15 were blown up over the heads of their inhabitants by the Zionist terror gangs. British interrogating officer, Deputy Inspector General Richard Catling, confirmed that:
“The recording of statements is hampered also by the hysterical state of the women who often break down many times whilst the statement is being recorded. There is, however, no doubt that many sexual atrocities were committed by the attacking Jews. Many young schoolgirls were raped and later slaughtered. Old women were also molested. One story is current concerning a case in which a young girl was literally torn in two. Many infants were also butchered and killed. I also saw one old woman … who had been severely beaten about the head with rifle butts. Women had bracelets torn from their arms and rings from their fingers and parts of some of the women’s ears were severed in order to remove earrings.”[1]
During the massacre; men, women, children and elderly were killed in cold blood and in a gruesome way and hundreds were wounded. The number of victims is disputed. Most sources put the number of martyrs at 254, including 25 pregnant women who were bayoneted and 52 children who were maimed in front of their mothers before being beheaded and the mothers slain.
“A chilling account of the massacre is given by a Red Cross doctor who arrived at the village on the second day and saw himself – the mopping up – as one of the terrorists put it to him. He says that the “mopping up” had been done with machine guns, then grenades and finished off with knives. Women’s bellies were cut open and babies were butchered in the hands of their helpless mothers. Around 250 people were murdered in cold blood.[2] Of those 250 people, 25 pregnant women were bayoneted in their abdomens while still alive. 52 children were maimed under the eyes of their own mothers, and they were slain and their heads cut off. Their mothers were in turn massacred and their bodies mutilated. About 60 other women and girls were also killed and their bodies mutilated[3].
The UN and the Red Cross, whose representatives were among the first to enter the village after the massacre, confirm that the number of the victims is in fact close to the 250 estimate. Other more recent sources name around 120 martyrs (see list of Martyrs), adding that the number of victims was exaggerated by the Zionist terrorists to spread fear amongst Palestinians everywhere. Ethnic cleansing was one of the declared aims of the massacre, and the atrocities committed at Deir Yasin were used to force residents of other Palestinian villages to flee for their lives out of fear of a similar destiny. After the massacre, Zionist terrorist gangs went from one Palestinian village to another, ordering Palestinians to leave “or meet the fate of Dayr Yassin”[4]. They would warn the residents in loud speakers: “The Jericho road is still open, fly from Jerusalem before you are killed, like those in Deir Yassin.”[5] During the expulsion of the inhabitants of Ramleh and Lydd in July 1948, Sari Nair from Ramleh recalled how they were kicked out of their home by a Zionist soldier who told them to leave “Otherwise you know what will happen. What happen at Deir Yassin will happen to you.”[6]
In addition to those butchered in their homes, 25 Palestinian men were rounded up by the Zionist terrorists, loaded onto a truck and paraded through Jerusalem in a sort of “victory tour” before being executed at a nearby quarry and buried in a mass grave. Also, eye witnesses reported that around 150 women and children were paraded naked through the Jewish neighbourhoods of Jerusalem. “The marauders gathered the women and girls who were still alive, and after removing all their clothes, put them in open cars, driving them naked through the streets of the Jewish section of Jerusalem, where they were subjected to the mockery and insult of the onlookers. Many took photographs of those women”[7] 55 children who survived the massacre were left at the Mendelbaum gate. 6 of these orphans went knocking on the door of Palestinian Jerusalemite Hind Al-Husseini seeking shelter. After hearing about the massacre, Al-Husseini went searching for the other children and after finding them decided to take care of them all. Her family gave her the mansion of her grandfather Dar Al-Husseini (the Husseini house) where she was born and which she renamed into Dar Al-Tifl Al-Arabi (Home of the Arab Child). Hind Al-Husseini dedicated her whole life to the orphans of Deir Yasin and other Palestinian children. 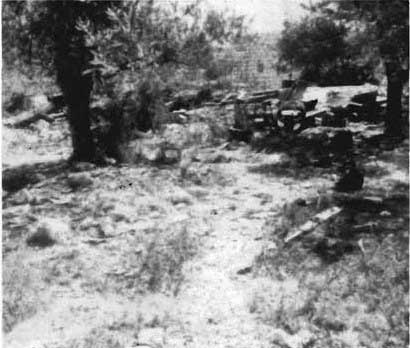 Site of the mass grave of the victims of Deir Yasin massacre
When the news of the massacre spread, the International Red Cross Society requested permission for its representative Jaques Reynier to enter the village and investigate the matter. The Jewish Agency – which claimed it had nothing to do with the massacre and publicly “condemned” it – tried its best to prevent an investigation of the massacre and delayed granting the permission 24 hours to give the Zionist terrorists enough time to erase all traces of the massacred (something the Zionist government and its IOF have been doing since then after every massacre: public condemnation followed by a self-investigation that clears them of the massacre while preventing an independent investigation). But the evidence of the massacre was visible everywhere; it was so horrific that all efforts to erase it failed. The Zionists even tried to change the landmarks of the village so the Red Cross representative would not find the village’s cistern which they locked up. But Reynier found it and testified to finding the maimed bodies and parts of bodies of 150 women, children and elderly. Other bodies were found under the rabble of the destroyed homes, and many were scattered along the streets of the village. Scores of bodies were also found in the mass grave at the quarry. (below is the testimony given by Jaques Reynier)