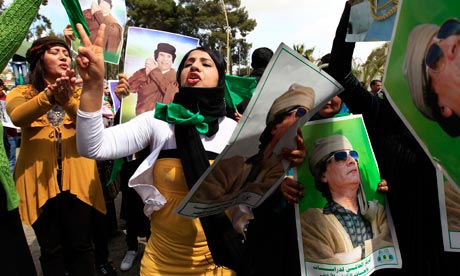 Colonel Gaddafi’s regime has sent one of its most trusted envoys to London for confidential talks with British officials, the Guardian can reveal.

The contacts with Ismail are believed to have been one of a number between Libyan officials and the west in the last fortnight, amid signs that the regime may be looking for an exit strategy.

Disclosure of Ismail’s visit comes in the immediate aftermath of the defection to Britain of Moussa Koussa, Libya’s foreign minister and the country’s former external intelligence head, who has been Britain’s main conduit to the Gaddafi regime since the early 1990s.

A team led by the British ambassador to Libya, Richard Northern, and MI6 officers, embarked on a lengthy debriefing of Koussa at a safe house after he flew into Farnborough airport on Wednesday night from Tunisia. Government sources said the questioning would take time because Koussa’s state of mind was “delicate” after he left his family in Libya. The Foreign Office declined “to provide a running commentary” on contacts with Ismail or other regime officials. But news of the meeting comes amid mounting speculation that Gaddafi’s sons, foremost among them Saif al-Islam, Saadi and Mutassim, are anxious to explore a way out of the crisis in Libya.

“There has been increasing evidence recently that the sons want a way out,” said a western diplomatic source.

Although he has little public profile in either Libya or internationally, Ismail is recognised by diplomats as being a key fixer and representative for Saif al-Islam.

According to cables published by WikiLeaks, Ismail has represented the Libyan government in arms purchase negotiations and acted as an interlocutor on military and political issues.

“The message that was delivered to him is that Gaddafi has to go and that there will be accountability for crimes committed at the international criminal court,” a Foreign Office spokesman told the Guardian , declining to elaborate on what else may have been discussed.

Some aides working for Gaddafi’s sons, however, have made it clear that it may be necessary to sideline their father and explore exit strategies to prevent the country descending into anarchy.

One idea that the sons have reportedly suggested – which the Guardian has been unable to corroborate – is that Gaddafi give up real power.

Mutassim, presently the country’s national security adviser, would become president of an interim national unity government which would include the country’s opposition.

It is an idea, however, unlikely to find support among the country’s rebels or the international community who are demanding Gaddafi’s removal.

The revelation that contacts between Britain and a key Gaddafi loyalist had taken place came as David Cameron hailed the defection of Koussa as a sign the regime was crumbling. “It tells a compelling story of the desperation and the fear right at the very top of the crumbling and rotten Gaddafi regime,” he said.

Ministers regard Koussa’s move to abandon his family as a sign of the magnitude of his decision. “Moussa Koussa is very worried about his family,” one source said. “But he did this because he felt it was the best way of bringing down Gaddafi.”

Britain learned that Koussa wanted to defect when he made contact from Tunisia. He had made his way out of Libya in a convoy of cars after announcing that he was going on a diplomatic mission to visit the new government in Tunis.

The prime minister insisted that no deal had been struck with Koussa and that he would not be offered immunity from prosecution.

“Let me be clear, Moussa Koussa is not being granted immunity. There is no deal of that kind,” Cameron said.

But government sources indicated that Britain does not believe that Koussa was involved in ordering the Lockerbie bombing.

Koussa was at the heart of Britain’s rapprochement with Libya which started when Tripoli abandoned its support for the IRA in the early 1990s.

He was instrumental in persuading Gaddafi to abandon his weapons of mass destruction programme in 2003. One source said: “Nobody is saying this guy was a saint because he was a key Gaddafi lieutenant who was kicked out of Britain in 1980 for making threats to kill Libyan dissidents. But this is the guy who persuaded Gaddafi to abandon his WMD programme. He no doubt has useful and interesting things to say about Lockerbie but it doesn’t seem he said ‘go and do it’.”

William Hague, the foreign secretary, said he had a sense that Koussa was deeply unhappy with Gaddafi when they spoke on Friday.

“One of the things I gathered between the lines in my telephone calls with him, although he of course had to read out the scripts of the regime, was that he was very distressed and dissatisfied by the situation there,” Hague said.