81 Reasons Why Gaza has the right to self-defense

Number 80 can be found in the Goldstone Report (2), the recommendations of which have yet to implemented some 18 months after its submission to the Human Rights Council, and Paragraph 1912 of which stresses “all States parties to the Fourth Geneva Convention relative to the Protection of Civilian Persons in Time of War of 12 August 1949 have in addition the obligation, while respecting the United Nations Charter and international law, to ensure compliance by Israel with international humanitarian law as embodied in that Convention.”

Has that happened? Clearly not. (3)

The most compelling reason number 81, can be found in the United Nations Charter, Article 52 which states: “Nothing in the present Charter shall impair the inherent right of individual or collective self-defence if an armed attack occurs against a Member of the United Nations, until the Security Council has taken measures necessary to maintain international peace and security.” (4)

There would also be a Reason 82, but for the United States power of veto exercised in the Security Council in February 2011. (5)

If the international community has abandoned its responsibilities towards Palestinians, and particularly towards Gaza, as the above examples over the last 63 years plus this map of Palestinian territories so graphically illustrate, what else is left to Gaza but self-defense? 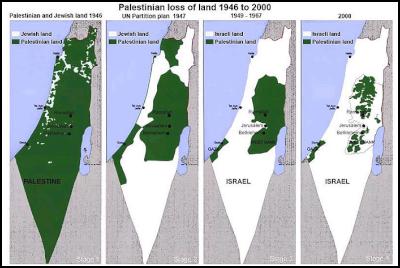 Israel and its chorUS disingenuously cite Israel’s right of “self-defense” to justify not only Israel’s disproportionate military response to Gaza – and Palestinians’ – genuine right to self-defense, but also to attempt to disguise Israel’s blatant land-theft from existing citizens.

Contrast the “newcomers” in Israel, for example, to many of those who in recent years have arrived in Australia. The latter have been considered illegal immigrants and incarcerated in off-shore islands or desert detention camps –the subtle distinction being that (i) those latterly arriving in Australia sought refuge from repressive regimes whereas the Israeli immigrants came from European and North American democracies…(enough said, perhaps) and (ii) unlike Australia’s (and New Zealand’s) immigrants, who now accept the existing population’s rights to their existing property, culture and citizenship, Israel’s immigrants bulldoze and destroy the homes of existing residents to build their own in their place, not only rendering thousands homeless but also destroying historic, economic and culturally-important sites such as religious buildings, olive groves, farms, and cemeteries – and now legislating that they also be of the jewish religion in order to have citizenship.

In the past week, Israel has killed at least 10 people and seriously wounded scores more in in Gaza in sustained military attacks with sophisticated weaponry targeted at civilians, a week in which so-called ‘rocket’ attacks from Gaza (into traditional Palestinian territory) have not caused any Israeli deaths, or physical injury. Yet Israel on Wednesday threatened “After barrage of rocket and mortar fire, Vice Premier Shalom says Israel may have to consider wide operation in Gaza; Minister Limor Livnat: Operation Cast Lead 2 may be in order.” (6)

After a cosy telephone chat to US President Obama, Israeli Prime Minister Netanyahu on Thursday said from Moscow that “Israel’s reaction to rocket attacks will be measured” (7) – but by what, is the question…caesium, perhaps?

US Secretary of Defense Robert now waits in Israel for Netanyahu’s return, discussing with his Israeli counterpart Barak how to ensure Israel maintains its ‘qualitative military edge’ in ‘a period like now when Israeli-US security relations were so strong.’ (8)

Obama in South America while his troops hammer Libya, insisting that the US role will be minor, Netanyahu in Moscow proclaiming the same for Gaza…this arms’ length war-mongering to give an appearance of moderation makes me very suspicious – to paraphrase Shakespeare, “Methinks they doth protest too much.”

A quick glance at the map reveals US, British and EU troops in the midst of massive military operations in oil-rich Libya from the west, Israel launching sustained military attacks against a potentially-unified Gaza/Palestine from the east and north – and slap bang in the middle, a very desirable waterway in the middle of a country which recently overthrew its USrael-friendly president, but which has yet to establish a categorically different regime…and whose military rulers have not opened the Rafah Crossing into Gaza, but today reiterated their prior commitment “ to Egypt’s international treaties in an early message to reassure Jerusalem and the United States,” according to the Jerusalem Post’s reporting of Thursday’s meeting in Cairo between Egyptian Foreign Minister Nabil Elaraby, and Rafi Barak, a senior Israeli Foreign Ministry official.

Yes, on any reading of the situation, Gaza certainly does have good cause for concern about their security and territorial integrity.

In the face of continuing military attacks against civilian targets and the absence of any meaningful and/or enforceable UN Security Council Resolution to protect them, and of any meaningful assistance from the international community in preventing Israel’s ongoing use of force, they have every legitimate reason to resort to self-defense, under Article 52 of the UN Charter.