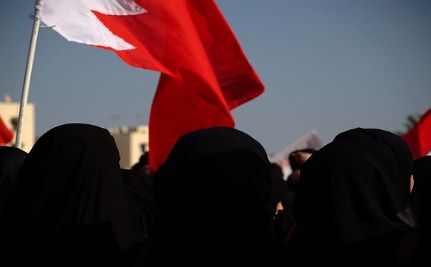 The governments of Bahrain and Yemen cracked down even further on pro-democracy protesters on Thursday. In Bahrain, the pearl monument at the center of Pearl Square that had come to serve as a symbol of the protestswas torn down by bulldozers. And in Yemen, the police fired live ammunition into protesters just after daily prayers at the mosque, killing 45, says the Guardian.

The official line about the destruction of the Pearl Square monument was, according to Bahrain’s foreign minister, Sheik Khalid bin Ahmed al-Khalifa, to give the square a ‘facelift.’ According to the New York Times, Said al-Khalifa:

“We did it to remove a bad memory….The whole thing caused our society to be polarized. We don’t want a monument to a bad memory.”

But the monument’s demolition can be seen as capping a string of actions taken by the government to put down the protests. On Tuesday, the government declared a state of martial law. Rallies have been outlawed, tanks surround the central hospital and troops from Saudi Arabia are stationed in Bahrain, also at the government’s request.

Authorities had also prevented the body of 30-year-old Ahmed Farhan to be returned to his family. Farhan was shot by security forces on Tuesday in Sitra, an activist Shiite village south of the capital, but permission for his body to be returned to his family had been met with denials for most of the week. Farhan’s body had shotgun pellet wounds on his back and a gaping hole in his skull. Some 5000 people attended his funeral:

Basel Hamad, a 35-year-old information technology manager, lives in Sitra as did his parents and grandparents, and he took part in the funeral march on Friday. He has three daughters and is wondering whether to move to Europe given what has happened in recent days.

“When this started, I thought the king would accept the changes,” he said. “Now the people are very angry.”

Ali Hbel, a taxi driver injured in the police action at Pearl Square on Wednesday, was also at the funeral. He showed his splintered arm and pointed at the coffin of Mr. Farhan and said, “This is not going to go for free.”

The crackdown of protesters has turned even more violent in Yemen. On Friday, government supporters turned live ammunition on a peaceful crowd of some 100,000 demonstrators in Sana’a on Friday, with at least 45 killed and some 200 wounded. This video shows protesters in the street walking towards a burning car until the sound of a sniper’s gun is heard from a second-story window:

The Guardian describes the scene:

As the prayers came to an end, however, the sight of billowing black smoke from a burning car caught the attention of protesters who began surging en masse towards it. Witnesses say security forces fired six shots into the air before turning their weapons on those charging towards them. As violence flared, plainclothes men appeared on the roofs of nearby houses and began firing down on the demonstrators with Kalashnikovs.

Sana’a University, the scene of the bloodshed, is next door to the mosque where many of the dead and dying were taken, the deafening sound of the muezzin’s call to prayer intermixed with the noise of gunfire echoing off the walls. Medics scrambled to reach the wounded as the wheels of decrepit ambulances, trying to escort them to a proper hospital, spun hopelessly in the mud.

Inside the mosque a throng of veiled women wailed with grief and tried to force their way past a line of students who had linked arms to ensure only medics and those in need of their help made it over the threshold. Meanwhile injured men, most in their early 20s, writhed in agony on shabby mattresses on the ground.

The New York Times says that ’the violence on Friday dwarfed that seen in earlier clashes’ and suggests that the Yemeni government has ’taken up the same playbook that Libya and Bahrain followed this week, using overwhelming force against protesters.’

At a protest in the south Syrian city of Deraa, two people were killed by security forces, the BBC reports. President Bashar al-Assad ’tolerates no dissent’; his ruling Baath party has been the dominant force in the country’s politics for nearly 50 years. Some 7000 protesters had gathered to chant ‘””God, Syria, Freedom” and anti-corruption slogans, and to accuse the president’s family of corruption.

The hoped-for Arab spring has only spread in some places, like Egypt, and something colder, and much more violent and authoritarian, is still in place.