Muhannad O. Bensadik, finger raised, stood joyful with his best friend Ahmed and others in liberated Benghazi, Libya, in Martyrs Square March 1. On March 12 he became a martyr himself when he was killed by government forces outside Brega, 140 miles from Benghazi.

I never met Muhanned O. Bensadik. And now I never will. He was my step-daughter’s cousin. He was killed by pro-Gaddafi forces in their attack on rebel-held Brega, a port city on the southeastern coast of the Gulf of Sidra. On March 4, in my diary here and above, he appears smiling, looking into the camera as young men and boys swarm over a liberated tank in Benghazi.

He was raised in Libya. But he was an American citizen, born in Eden, N.C., on Oct. 9, 1989. Summers he often spent in his mother’s speck of a hometown, Martinsville, Va. In fourth grade, he attended school all year there. His two sisters, 12 and 8, still live there with his mother. His brother and father live in Benghazi.

From age 7, he was in the Libyan Boy Scouts and when he got older he became a troop leader. He was a fan of the blues, of Bob Marley and Tupac Shakur. His favorite novel was of the French Revolution, A Tale of Two Cities. His favorite movies included Saving Private Ryan and Eclipse (of the Twilight series). He loved The Simpsons, South Park and Happy Tree Friends.

He studied taekwondo, was an avid swimmer and enjoyed spear-fishing. His hobby was photography. He graduated from high school in 2007 and wanted to study mechanical engineering in the United States. But he never got here.

He was a generous boy. He often helped feed the poor in Benghazi during Ramadan. And when he first joined the rebels surging out of Benghazi, headed ultimately, they hoped, to Tripoli to free their country from murderous tyranny, he helped pass out food to people after Ajdabiya was liberated. Somewhere between there and the port of Ras Lanouf, he acquired a rifle and some basic training.

Here he is being briefly interviewed by Al Jazeera in Ras Lanouf, starting about 0:45:

Hassan: There is brutal fighting going on in Ras Lanouf.Muhannad: Gaddafi’s battalions are shooting from the military ships from the sea, and from tanks on the mountains and by missiles from behind.

Here is an interview with him on CNN on March 6.

Six days after this interview, Muhannad and four friends, including Ahmed, were caught in an attack just northeast of Brega. They split up and ran, three and two. Muhannad and another friend disappeared. Ahmed and the other two escaped. Muhannad was shot dead. We don’t know whether his friend was. His father, who was injured near Brega and is now in the hospital in Benghazi, has not been able to recover Muhannad’s body.Here is an audio link to a comment today in English from Muhannad’s father to a supporter of my step-daughter’s anti-Gaddafi dissident group. He explains what happened as he was told. There is a transcript and an Arabic translation here.

Meanwhile, Gaddafi’s forces march on. Today, they are bribing people in Brega with 500 dinars to fight the passionate but poorly armed, poorly trained rebels, most of them civilians until February 15 when an arrest of the dissident Fatih Tarbel sparked the revolt. The dictator, Brother Leader he calls himself, pays Libyans to kill Libyans so he can continue his rule.

If Gaddafi succeeds, if he regains full control, everything we know about him indicates a quiet bloodbath will take place. He will have plenty of time and plenty of money. At risk is every Libyan who has protested, has joined dissident Facebook groups, has put up a YouTube video, or has spoken to Al Jazeera. As well as the families of those who have done these things.

As the international community slowly discusses whether to take up the Arab League’s requesting a no-fly zone, many Muhannads are dying. If nobody answers their plea, many more will. 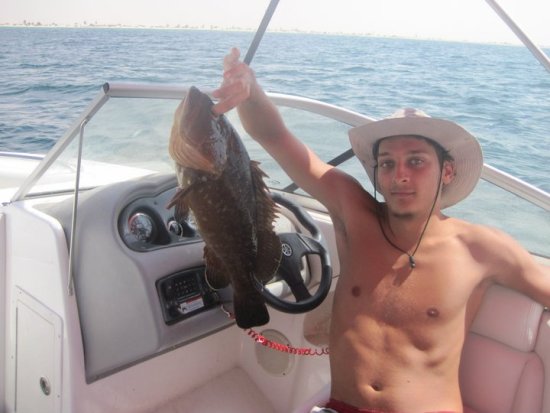 Muhannad poses with his catch last August in the Mediterranean near Benghazi.